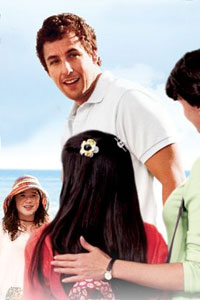 SANDLER COOKS UP A STORM.

Adam Sandler rarely talks to the print media, so the assumption is, the38-comic has a morbid fear of the press. If such a fear exists, he is not demonstrating that while promoting Spanglish, a very a typical Sandler film, with veteran James L. Brooks at the helm. A detailed character study of a marriage in crisis with Sandler cast as a successful chef trying to hold his family together , while being drawn to his beautiful, new Mexican maid. Two years shy of 40, Sandler denies that taking on the likes of Spanglish is away to segue into more mature roles, as opposed to the slapstick work that initially defined his comic persona. "I'm not looking to get away from anything," Sandler explains. "I like what I've done, what I get to do and I enjoy working with my friends. I loved those movies but this is incredible. I met Jim Brooks (Spanglish writer/director/producer) a long time ago, a quick hello kind of thing, and I loved all his movies, so when he wrote a movie and he wanted me to be in it, I was extremely excited. But, in my head I didn't say, 'oh, I'm gonna run away from my other stuff', I was just like 'yeah, I'd like to do that too."

Sandler says that he modelled his latest character, a well-intentioned family man, after members of his own family. "This character feels so much like my brother, who has two children, a wife and he works with me. He chooses to stay in New Hampshire because he wants his kids to grow up in the school they started with and doesn't want them to lose friends. He is his family's hero. When I was in Florida when we had Thanksgiving, the last image I saw was my bother with his two kids and his wife, hanging out on the beach swimming and it reminded me of Spanglish, just the fact that this guy gave me a wave, said 'love ya' but he was like these are my kids and I want to make sure they have a great day in Florida. I admire that. That's how I got to grow up and that's how I plan on raising my kids."

In Spanglish, Sandler gets to entertain on screen paternalism, which prompts one to ask the married actor whether he hopes for fatherhood in his own life. "I just recently started trying, doing the best I can," Sandler laughingly admits. "Feels good to try but playing a father, I'm getting a little older. I see now that I'm taking it more serious and I do want that lifestyle and do want children," adding that he studies dads more. "I watch what they go through and admire my father more than I ever did, as well as my brother and sister. The thing that I always think about with my parents and what I think my character is similar to, is when my parents would get a phone call 'hey, we're going away to Bermuda this weekend. You want to come? But, we're not bringing the kids'. My parents would go 'no kids? Oh no, then we can't go'. That was my father and mother's sacrifice. They didn't care about anything but the kids and I feel like that's a big part of my character."

Sandler remains somewhat philosophical about his career, not adopting a specific plan as to whether a film such as Spanglish, somehow fits into an overall plan. "I look back at it afterwards. When Jim offered this to me, I didn't say 'well this will go perfectly with what I'm looking to do'. I do love the films I've done in the past, I work hard in my movies and my friends work hard and we're trying to make people laugh, I'm very proud of that. But, looking back at my career, when I end up having kids and I say 'throw in that Spanglish and let's take a look at that', I know I'm going to be very proud of it," Sandler says, smilingly.

Sandler has remained on top of the Hollywood tree since 1995's Happy Madison turned him into a comic superstar. But while in Spanglish, Sandler's chef worries about reviews, Sandler himself doesn't see that happening as his own career goes from strength to strength. "When I got into this I never thought about reviews or what people would say about me. I was just a young guy who was excited to become a comedian and an actor and I just wanted to get to do what I got to do. I think that it's pretty amazing, that my character (in Spanglish) is that aware of the consequences of fame, because I wasn't like that in real life."

Asked about his own family and advice he was given growing up, Sandler offers a reflective pause. "I never had a speech from my father 'this is what you must do or shouldn't do' but I just learned to be led by example. My father wasn't perfect. He had a temper which I took some of. He would snap but the older he got, he started calming down. He learned about life but the thing that he taught my whole family was that family was the most important thing and, no matter what, if a family member needs you, you go and help them out, you get there. He just made us feel comfortable and respectful to other families, as well as my mother."

Sandler continues to try new things. He'll be next seen in the remake of The Longest Yard and is expected to star in the fantasy comedy Click, but beyond that, Sandler is non-committal, "but I did learn on this movie, the most I've ever learned about making a movie from Jim. I always thought I worked hard and my friends worked hard but I've never seen anybody go from start to finish. There was a lot of work in pre-production, just establishing relationships and becoming comfortable with each other. Jim's process is the most concentrated experience I've ever seen. He never stops or gives up. I learned that I'm not a hard-working as I thought I was."