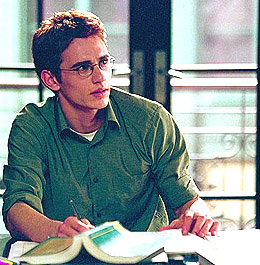 FRANCO HEADS TO THE SEA FOR GRITTY COP DRAMA

James Franco rocketed to success for his starring role as James Dean in the acclaimed TV biopic. Since then, Franco has been seen in the blockbuster "Spider-Man" and for his next outing; he co-stars as Robert De Niro's estranged son in the cop thriller "City by the Sea". The publicity-shy actor spoke with PAUL FISCHER in Los Angeles.

The one thing noticeable about Hollywood star-on-the-rise James Franco, is his shyness, far more so than the norm. Quietly spoken, avoiding eye contact where possible, it is Franco's reputation as a method actor that has garnered the respect of his peers. In "City by the Sea", for example, a cop thriller in which Franco shines as the drifter, drug-addicted son of detective Robert De Niro, the 25-year old immersed himself in the role by learning to be actually homeless for a time. "I got a sense of what it is like to live on the street and I felt kind of separate from the rest of society that I usually feel a part of," Franco demurely explains. "You go and ask people for money and they kind of look away and you feel how everyone shuns you, you are kind of withdrawn and you are dependent on yourself in a different way that I was before. It becomes partly about isolation, about having no one in one's life, that the only person you can depend on is oneself, as best as this poor kid can. And I guess I got a vision of maybe living that way for an extended period and how bleak that could be and how much it becomes about survival."

Franco has also survived the acting game quite nicely. He was first noticed on the short-lived but acclaimed "Freaks and Geeks" TV series, before being cast in the role that would change his life: James Dean, in the self-titled biopic. Franco's uncanny similarity to Dean and his own demeanor off screen, made him the perfect choice for the role. Playing Dean taught the young actor a huge amount, referring to the late star as "one of the most influential actors of this country. He took after Brando obviously, but he brought so much of himself to his roles that it was this new vulnerability, new way to expose oneself and to make it so painfully real on screen, and I try to emulate that," he explains. Franco's approach to acting mirrors that of the legendary Dean. "I will try to bring as much of myself into these roles because I think it gives it a more genuine feel, that's what people are into."

Known for shunning the spotlight, Franco stepped into it full on when he became part of the "Spider-Man" juggernaut, an experience far different from the more insular "City by the Sea". "Obviously, that was such a different kind of movie though we are still working with top people. Willem Dafoe has been an actor that I have admired almost as much as De Niro, and Sam Raimi, is such a great director, so it's still a good experience. I'm still acting, and Sam made a point of bringing that out, giving us real scenes and interaction, despite it being this huge movie. It still feels the same, but also a little different because in the comic book world, I mean there is a little more freedom to be bigger." And with the film's huge success comes the stardom and unwanted attention that goes along with it. Clearly an unwilling star, Franco says that while he has attained success in movies, his priority is to remain "working as hard as I can on the roles and stay focused on the acting."

"City by the Sea" afforded him to work with the Dean-like De Niro, another master of method. Working with the legendary star was an added bonus shooting this film, describing his co-star as "a very calm easy-going man, but you know, he's been such a hero of mine for so long, that even though I have been around him for some time, when we finally got to my scenes with him, the old jitters came up." He adds that having actors like De Niro and Oscar-winner Frances McDormand in a thriller "sets it apart from the ordinary, and that's what drew me to this."

Continuing to play fairly sad characters, Franco next appears in Sonny, the directorial debut of Nicolas Cage "where I play a prostitute. As you can see, "it's another dark film." But Franco is clearly up to the challenge.

James Franco/City by the Sea Interview by Paul Fischer in Los Angeles.