He captured the hearts of audiences worldwide in the thriller The Sixth Sense playing Cole, the kid who saw dead people, now Hayley Joel Osment stars as David, a child robot longing to be human in the sci-fi flick Artificial Intelligence. Recently in town to promote his new movie, GIRL had the opportunity of speaking to this rising young Hollywood star.

Girl: You're here in Australia to promote the release of your new film 'Artificial Intelligence' (A.I.) which was directed by famed director Stephen Spielberg. How did he make you relax on your first day?

Hayley: Well he is such a down-to-earth person and a kid at heart that just being around him is fun.

Girl: Were you nervous at all?

Hayley: Yeah a little bit, especially meeting him for the first time and being on the set the first day. I think I was more excited than nervous.

Girl: Did you celebrate when you landed the role of David in A.I.?

Hayley: Well my dad was with me when I got the part and we were both very excited. I went home and told the rest of my family and friends. It was just incredible; it's something I never thought would happen, let alone this early in my career.

Girl: In the film A.I., you share a lot of scenes with Teddy, the robotic teddy bear. Did you find it hard filming these scenes opposite a robot?

Hayley: It was not necessarily more challenging than working with a regular actor but it was a different experience because you would have to get over the fact that he was playing a super toy but you would also forget that he was being controlled by puppeteers.

Girl: How do you mentally prepare for such challenging roles like Cole in the 'Sixth Sense' and David in A.I.?

Hayley: In a lot of these roles there isn't a lot you can study or draw on from your own experiences to sort of make it real for you. A lot of it just involves a big imagination to be able to feel and react to what is going on in the scene, making it as real and spontaneous as possible.

Girl: And how does it feel being labelled as the next Hollywood heartthrob?

Hayley: (laughs) I didn't actually know that was the case.

Girl: Is it flattering?

Girl: So was it hard playing a character who acts lifelike yet is quite complex at the same time?

Hayley: It was, it's hard to get into any character's mindset but for David in particular who had certain differences - he wasn't even human at all, it was quite hard. 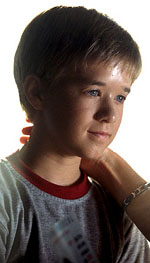 Girl: So do you think that the film's vision of the future is bleak or hopeful?

Hayley: It is hopeful and there is some tragedy involved but there is good that can come out of some of the things that happened in the future.

Girl: Did it make you think about what could happen in the future?

Hayley: It made me think just how accurate the depiction of the future in this film could be, it sort of makes everyone wonder.

Girl: Being a fourteen-year-old, do you get to enjoy things that other regular kids do?

Hayley: Yeah I do, when I'm not working there are lots of things to enjoy at home, keeping things normal has been important.

Girl: How do you find juggling your school commitments with the demands of your acting career?

Hayley: When I'm not working I go to regular school with my friends but when I am shooting a film, I have a tutor on the set and so that keeps me in the know about what is going on at my school. It's not too hard; I have been doing it this way for a long time so I guess it has become easier with every year.

Girl: Now in your opinion, what makes a good film? What do you look for when deciding which film you're going to work on next?

Hayley: Well it's all about the quality of the script; is the character going to be challenging enough to play? So these are just some of the things I look for when choosing my next project. 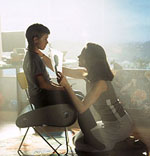 Girl: Australian actress Frances O'Connor plays your mother in the film, what was it like working alongside her?

Hayley: It was great, she is just a really nice person as well as a talented actress, so that combination made it easy to pretend that she was my mother in the film. It was a lot of fun to be around her on the set, just talking to her and working with her was a great experience.

Girl: So does it feel like work when you're acting on the set? Or are you having more fun than anything?

Hayley: I'd say it's a bit of both really. The harder it gets the more fun it gets for me!