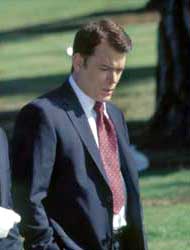 Meeting Alec Baldwin for the first time, it is no surprise that he rarely talks to the print media. Before heading to the airport, he granted select journalists a mere 6 minutes of his time to try and promote The Last Shot, the comedic tale of an FBI agent who poses as a Hollywood film producer in order to ensnare some mafia big wigs. Serious, intense and always to the point, Baldwin makes it clear how he feels about using and marketing actors, when asked to simply comment on satiric elements of The Last Shot, and the fact that these days, industry inside jokes now play equally well everywhere' "I think that the business is so kind of self-referential now with the 'making of' and 'HBO first look' where there's a whole kind of industry now about the forensics of the business so to speak that wasn't here 20 years ago," says the outspoken actor. "I think a lot of that is very detrimental to the business and has demystified the business in a significant way, but these are viewed as marketing tools no doubt. I think that most people around the country now get it about a lot of the lingo and a lot of the attitudes that dominate the movie business in a way that they didn't 20 years ago."

Baldwin raises his voice against the studio's marketing departments when asked whether Hollywood's so-called 'dream factory' should be laid bare as it is in The Last Shot. Not referring to his movie, Baldwin instead insists that "it's a business. When you do a movie at Paramount, and you finish shooting the movie and you walk across the hallway, to go to Entertainment Tonight, which they own, you're doing a television show which the studio owns that they're charging commercial time for that they're earning money on to promote the movie that you just walked off the set of, so the synergistics are not lost on everyone," says Baldwin, angrily. "I'm trying to get the Screen Actor's Guild to have a conference with the publicity departments of the major studios, to talk about the fact they're taking actors now and kind of inserting them like suppositories into the cavities of the movie-going public, because using actors now is all so much marketing. What used to be clever marketing campaigns by studios has been replaced by actor-driven campaigns, so that when the movie fails, the marketing department can step back and say, 'well, we ran Alec's picture up the flagpole and nobody came to the movie so we're clean.' We used to have a Saul Bass poster and there was some creativity, not that there aren't creative elements in marketing now, and people who do marketing for the studios work just as hard, but they are daunted by a more crowded marketplace. The problem is that most of the marketing that's done now means let's get the actor out there to charge up the hill and if you get shot to pieces you get shot to pieces. Get out there and do Letterman, Good Morning America, these tiresome tedious round of promotional things to raise the awareness again in a very crowded marketplace to call attention to your film. The only thing worse than what we have to do, is if we don't do it, because then, you're the tree that falls in the woods and nobody hears it. It's a bad, bad situation when there are just so many Goddamn movies out there right now which is ridiculous."

Ironically, of course, Baldwin had indeed just finished a flurry of TV interviews, and in this 6 minutes, still has to convince us why it is that he is starring in The Last Shot, a self-reverential but hilarious look at Hollywood through na?ve eyes. Baldwin says there was more to choosing this project than the appeal of the character. "I never look at movies so much in terms of the character. I read the movie and I say this is a movie I want to see and I kind of screen the movie in my mind in its entirety then say to myself 'is this a movie that I want to be in?' I've been offered roles that were dynamic and flashy roles in movies that I thought were very mediocre, then I've played roles that weren't as dynamic in great films. I'm much more interested in being a modest component in a great film than being a dynamic component in a film that's not that worthy. So I say this is a very well-written film, that Jeff Nathanson's a brilliant writer, a brilliant guy and I loved working with him. We've got a great cast, I thought it was funny, and it's funny how the best movies by my lights are movies where it's so well-written you don't have to work that hard, because it's all there. Nathanson's created the situations for you and you need to get out of the way of what's clever and just stand there and say the lines. In great writing that's the way it is; there's less you have to do, and just say it."

Baldwin says he had no difficulty in relating to this character's desperate need for success. "Well I think anybody in this business gets to that point where you need a hit. My character in the movie is a character that's desperate for a hit record, in that he needs a sting, a bust, a successful operation to raise his stock in the eyes of his brother and the bureau. I'm in this business so I feel it every day. I mean, unless you're the highest paid actor who's at the top of the pile, everybody else is in there thinking, I hope that I do something that either creatively excites the community or you do something that sells a lot of tickets- one or the other."

An actor for some 2 decades now, Baldwin has remained politically outspoken on so many issues, that it has been frequently suggested that he run for politics himself, but on that subject, he remains perfectly coy. "To do that would mean to give up what I'm doing now and I'm really not finished doing that, but I don't imagine I will do this the rest of my life," Baldwin admits. "I'm having a good time doing this again after a few years of not having a good time. I've been doing this for 25 years, so my enthusiasm peaks and ebbs and I really am enjoying myself now because I've worked with some people I loved. I loved doing Cat in the Hat with Bo Welch, The Cooler with Wayne Kramer, and on Last Shot, I loved working with Matthew and Jeff. I mean, for me it's all about what's the experience like making the movie? Has it been a good way to pass the time, and I don't really think about how well the movie is going to do. If it does well, great, and if it doesn't it doesn't."

THE LAST SHOT OPENS ON OCTOBER 24.