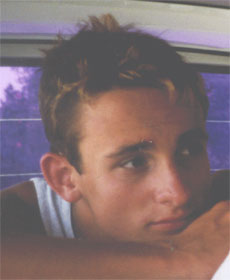 American actor James Holzier is fast becoming one of the most popular actors worldwide. This fresh face was originally born in Virginia, and now resides in California and Texas.

As a child James spent his early years in a hospital. His mother suffered many miscarriages before his sisters were born. His parents were advised there would be no more children but against all odds James was born. With numerous flatline situations doctors advised he would not make it. Proving everyone wrong he thrived and survived.

When James Holzier was young he observed and studied those around him including performers. He discovered his passion in acting. He stood out and showed major potential when he was the only minor allowed in adult acting classes.

At age thirteen, Holzier was persued by managers in California with varying roles. He declined to fulfill commitments to his fellow peers.

James faced near tragedy again, when a drastic fall off a friend's two story roof nearly cost him his life. That would have been dramatic enough for most, but he impaled his side into an iron speared gate. Doctors told James he was fortunate to have survived. Later he was involved in a fire accident, receiving burns on his face. Advised by doctors he would have scarring, James remained positive, and bears no scars today.

Although James excelled in sports. His love for acting would continue to push him instinctively and creatively in the right direction.

Among his many stage credits. Holzier's theater experience includes the title roles in Shakespearean plays such as. "Romeo and Juliet", "Hamlet" and "Othello".

Holzier who is on his way to becoming an international star overnight, already listed in films without screen testing, which he believes is "pretty crazy."

In an interview James is recently quoted in saying, " None of this is about me...I'm not better than anyone else."

Girl Power is strong with this sexy charismatic actor. James Holzier has just been given an International Day. Charlie Chaplin, Julia Roberts, Johnny Depp are among other big stars to also receive this honour. This talented actor and inspiring person is the first to receive this huge milestone before releasing their first film.

Watch out for this rising star!