Jess Chalker, a remarkable Sydney musician, was discovered via YouTube when a music video she posted racked up over 400,000 hits, before this, her friends and family didn't even know that she was writing music. Jess' song, Said the Raindrop to the Seed featured on the front page of YouTube and after two live gigs she was supporting Lior's national tour.

Jess recently chose music over her Masters of media degree at The University of Sydney which has seen her perform with the Sydney Theatre Company, and at the 2009's APRA Awards and Peats Ridge Festival.

In 2010 Chalker finished as a runner-up in the John Lennon International Songwriting competition with a home demo of Said the Raindrop to the Seed.

Jess Chalker's self-financed EP is incredibly amazing. There is not one genre to explain this music; there is a mix of folk melody and rich rock with an added touch of soulfully intimate pop. She has an amazing voice that is showcased by her honest and intense lyrics. The album displays clear emotions from fear to friendship, depression and death.

"I wrote the first half of the lyrics sitting on an aeroplane mid-air on a Sydney to Melbourne flight. It was pouring with rain. I was missing my fiancée and it was just a kooky little tribute I wrote for him. I recorded it in front of a web cam a few days later, sitting in my extremely messy living room, and I never imagined the response to it I'd get from You Tube - I would have at least cleaned the house had I have known!",says Chalker of Said the Raindrop to the Seed, the title track which hints at an unmistakable nod to the60s/70s folk music scene.

On the making of her debut EP, Chalker reflects, "Music can be so much like fashion, so I tried not to be tempted by clever production tricks or gimmicks and just let the songs speak for themselves; the recordings are very honest and quite straight-up. Tony (Buchen) and Wayne (Connolly) were great to work with and both very accommodating of my vision. The experience has been an invaluable precursor to recording my first album, which I'm already preparing for!"

Track Listing
1. Said the Raindrop to the Seed
2. The Aeroplane Song
3. Love Story Endings
4. A Letter to My Son
5. Warning

Said the Raindrop to the Seed EP will be available for purchase on iTunes and via www.jesschalker.com 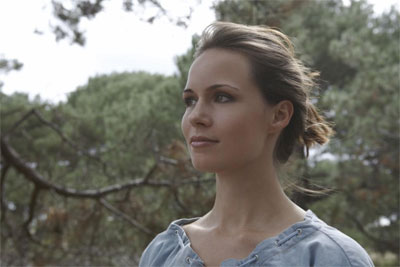 How does it feel to hear your song played from a CD and online?

Jess Chalker: Not in the least! It was a wonderful surprise and amazing way of connecting with an audience of all sorts of people from around the world - from South Africa to Albania. People feel a lot more free to express themselves online in a way they might not necessarily feel comfortable doing so in person after they see you at a gig. So that is always lovely.


Explain the experience of supporting Lior, on the national tour:

Jess Chalker: Amazing! Lior is a very cool guy, very professional and super talented so I learnt a lot from him and that whole experience. But it was frightening too as I think I'd played the sum total of two live gigs ever before I landed that tour! I probably wasn't quite ready for it at the time.

Jess Chalker: Do you mean that talent and art is a very small part of it? Yeah. I've become much more aware of the business/project-management side of it. A great deal of artists whose music you hear about generally have a lot of financing behind them and clever strategists stoking their machinery. There are even more incredible artists around but you have to dig a little deeper to find them.


You write your own songs, what's your inspiration?

Jess Chalker: I'm often inspired by the artists I am listening to at the time. That and of course the usual things; life, love, stuff you read and so on.

Jess Chalker: At the moment I'm listening to a lot of INXS, Florence and the Machine, Laura Marling, and Mumford and Sons. I actually saw Marcus Mumford supporting Laura at the Factory Theatre a few years back. He was just as amazing then and look at him now!

Jess Chalker: I'm doing a bit of a solo tour of the east coast (see www.myspace.com/jessicachalker for dates) and after that will do another EP then start thinking about an album when the time is right.

Jess Chalker: Sometimes I dream about having a life of routine but I wouldn't be as happy. Maybe just a little less crazy!

Jess Chalker: Definitely performing live. Recording is fun but can be a very tedious and frustrating process sometimes.

Jess Chalker: The Youtube stuff spurred me on it's true but if there was one particular artist that inspired me to write songs it's Joni Mitchell. I'm a Joni freak.

Jess Chalker: Comparing myself unfavorably to others. I've stopped doing that now. It was a one way path to self-destruction.

Jess Chalker: Prince. That man is a genius.

Jess Chalker: Yep I do - it's www.jessicachalker.com and there are lots of mega cool drawings on it by my very talented designer friend, Monica Higgins.

Jess Chalker: Good relationships, a positive attitude, a curious mind, an adventurous spirit and compassion for others.

Jess Chalker: Thanks so much for your support. One day I'm going to have huge big tea party and you are all invited.

Full Name: Jessica Chalker
Nickname(s): Chalks, Chalkdaddy
Star Sign: Pisces
Music Talent: Singing/Mostly guitar/A bit of piano
Favorite Food: Japanese
Favorite Film: Labyrinth/Amelie/The Royal Tenenbaums
Favorite Actor: Cate Blanchett or Meryl Streep. I love watching Penelope Cruz too. She has such fire.
Pet: Not allowed but I'd love to have a yard so I could own a dog :(
Best Feature: I have very nice ears, I feel
Worst Feature: My feet
Person You Would Most Like to Meet: My grandfather. (I inherited his flat feet apparently)
Hobbies/Interests: Film, music, food, books and travel
First Job: I worked at fruit shop when I was 14 and was paid in fruit
Are you a Pub, Bar or Club kind: Pub girl!
What Can You Never Leave Home Without: Lip gloss
What is the first thing you think of when you wake up in the morning: God I hope today is Saturday!