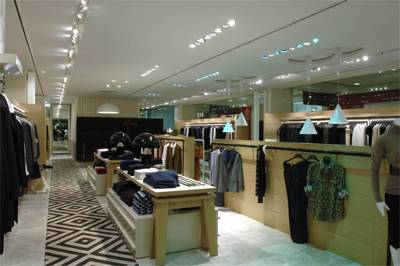 SABA, the label synonymous with directional yet understated collections for both men and women, is poised to re-establish its leading edge profile in the Australian market with the launch of a new concept store in Sydney.

"The re opening of SABA Sydney Central Plaza is another step in the return to the brand's premium positioning as a fashion leader" said Rosanna Iacono, General Manager, SABA.

"The store fit-out also marks the first in SABA's new retail style which is at the forefront of the latest interior design trends, and where emphasis is placed on merchandising the collections in an inspiring way ", Iacono added.

SABA Sydney Central Plaza makes a distinctive departure from the ultra minimalist and all white concept of past years. Once again at the forefront of design trends, the store unveils a more evocative and textural interior aesthetic that perfectly reflects SABA's refined design signature. This includes warm woods, elegant motif wallpaper and bold geometric carpeting, all punctuated with cutting edge decorative elements such as the legendary Atollo lamp by Oluce, Italy.

Leading architectural firm, HP&G, was engaged to develop the new retail concept which draws its inspiration from European styling and particularly 'French Moderne'. "While this aesthetic will roll out over the coming year in other SABA stand alone stores, each will be imbued with distinctive details which impart a character or personality befitting the location", advised Iacono.

SABA traces its fashion legacy as far back as 1965 when Joe Saba made his first forays into the local fashion scene. Over the ensuing decades his Collins Street, Melbourne store became a mecca for cutting edge collections from some of the most influential designers from around the world. Saba was credited with driving the prominence in Australia of the new wave of Japanese designers in the 80's including Rei Kawakubo of Comme des Garcons and Yohji Yamamoto.

Later, recognising a gap in the market, Saba soon ventured to develop his own collection of separates for both men and women, locally manufactured to his exacting standards. Word spread, demand grew, and over the next ten years, SABA (the label) grew to become an iconic name on the Australian fashion landscape.

The Apparel Group purchased the SABA brand in 2005. Over the past year a new design and management team has seen a return to the core brand values first instilled by it's founder. The Winter collection for 2006 marks the first under the direction of this new team.