THE SEDUCTION OF DANIEL RADCLIFFE

Daniel Radcliffe is not the young kid who first graced our screens in the first Harry Potter film back in 2001. Mature and eloquent, he is clearly relieved that his return to Los Angeles is not precipitated by the hordes of fans and media that gather every time he attends a new Potter event. "It's sheer madness", he exclaims laughingly on the other end of the phone from the Los Angeles hotel room where he is been talking up his first non-Potter feature, December Boys. An Australian coming-of-age story, in which he plays Maps, the oldest of a trio of orphans in 1960s South Australia, in considering what to do between filming the Potter franchise, Daniel Radcliffe says there are a number of factors that he considers in taking on a project. "One is that the film scripts are great and that would always be the thing that I initially consider. And on the whole some of them I've read were good, but they just weren't what I was looking for, because they weren't different enough, or enough of a challenge." That is until December Boys came along. "That was the one that really did and it would be something I'd never done before, or anything resembling it before. So that was amazing," Daniel Radcliffe explains. " Also, weirdly enough, the thing that made it really stand out, were the stage directions, because normally directions are very typically formulaic: 'He walks over there, he opens the door, he goes through it,' along those lines. But in this one, they were just outtakes from some fabulous novel, beautifully written, special and descriptive. It just made it - to use a horribly overused phrase, leap off the page." 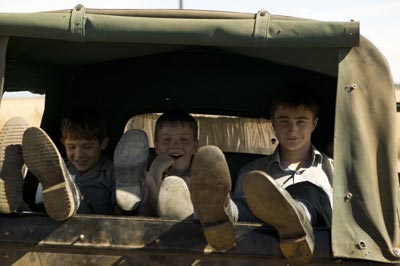 In the film, Daniel Radcliffe plays an Australian character far removed from Harry, and says getting into the psychology of an Australian teenager was not as challenging as it sounds. "I've spent quite a bit of time in Australia these past few years, and I love the place. But to be honest, I didn't actually consciously think, 'Right, this is how an Australian teenager thinks,' so it was mainly about putting myself in that situation." As for identifying with this latest character, Daniel Radcliffe says that was the easy part "because I felt very early, from the first reading of the script, I knew what Maps was about and the sort of person he was. I think when you're looking at any character; you have to look at what they come out of. I think Maps' driving force is, he just has an overwhelming desire to be needed by somebody. Not necessarily loved, but just to have someone in his life who really wants him there, and feels they rely on him. And at the beginning of the picture, they absolutely rely on him for protection and all those things, but halfway through the movie, they meet Fearless, who's older, cooler, tougher, and has a motorbike, so they abandon Maps for this other guy. Therefore he's left very much on his own and then, of course, he's abandoned once more when he leaves them."

December Boys is quite the departure for the adolescent Daniel Radcliffe, and along with his stage debut bearing body and soul in Equus, the actor says that playing such a variety of characters in not necessarily about consciously distancing himself from the Potter character. "It's about making sure that I can be viewed as an actor, rather than just a character and I think that's sort of what it came down to for me." Daniel Radcliffe is certainly aware of his own evolution as an actor but prefers not to focus on that too much "because it will actually be harder for you to step out of that role, and a harder and longer process. So I think it's just about recognizing that people do see you as that, but also just being able to move on, and not really worry too much about how you're perceived." 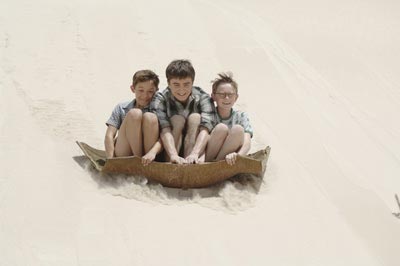 Harry Potter has also evolved as a cultural phenomenon, a fact Daniel Radcliffe is acutely aware of but says he tries to see past all of that. Grounded and down to earth, Daniel Radcliffe is aware of how to separate the cultural phenomena of the Potter world with his own reality. "I was asked, in an interview, a pop culture question and I had no idea, because I am sort of totally removed from that world, in a way. I try to avoid those kinds of things, just because I think that way madness lies. So I think it's about just keeping a level head, and have people around you who are gonna be honest with you. And - and things like that. I have great parents, and great friends around me who are always gonna tell me the truth and if you can do that, and keep those people in your life, then you'll be fine."

The world of Harry Potter still remains a part of his life and though, during his publicity rounds for the last movie, Daniel Radcliffe said to the press that didn't have a clue about the last book in the series. Apparently, however, that was not quite true as he cheekily concedes. "I'd actually been given a slight clue by Ms. Rawling as to the situation," he says without revealing anything. "It was more than my life was worth to divulge that secret, but I have to say, I've always very much enjoyed that sense of smugness for the few moments that I did know what was sort of happening to him," Daniel Radcliffe says, laughingly. But he also read the final book now in its entirety. "I think I would be shot my millions of adoring fans if I'd not." 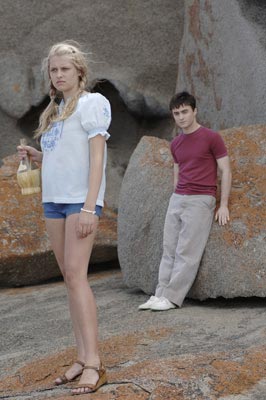 Daniel Radcliffe is about to start production on the 6th film, following frenetic publicity in Australia for December Boys and says he is looking forward to shooting the second last movie of the franchise. "It's always a pleasure to work with David Yates, who's directing the sixth, so I'm very, very excited about going back to work with him again." As for life beyond this Harry Potter film, "I think next year I'll be doing Equus on Broadway, which will be very, very exciting and very, very tough. Hopefully if another script comes along, then also I'd love to do that in between six, and Equus on Broadway. But if it doesn't, I would never do something just for the sake of it, so if it happens it happens and if it doesn't, then I might just rest which could be good as well." Asked if he is looking forward to finally putting Harry to rest permanently, Daniel Radcliffe pauses. "I am very much, but it's daunting. I think I'll be very sad to suddenly not have Harry in my life any more, but I think I can rest safely in the realization that I'll at least always be asked about him."

Based on the classic Michael Noonan novel, "December Boys" is the story of four orphan teenagers growing up behind the closed doors of a Catholic convent in outback Australia during the 1960s. As the boys watch younger kids get adopted by loving families, they begin to realize that as they get older, their turn may never come. When the convent sends the boys to visit the seaside one summer, they finally have something to look forward to.

While at the seaside, the boys meet a young couple unable to have children, who would make the perfect parents. The eldest of the boys, Maps, finds himself drawn to Lucy, a beautiful girl from down the coast. Competing to be the most adoptable, the rest of the boys, Sparks, Misty and Spit, severely test their friendships as long gestating feelings of rejection explode to the surface.

The bonds of friendship eventually overcome the rivalries, sealing forever the strong ties that bind the December boys as they learn the real meaning behind friendship, family and love.