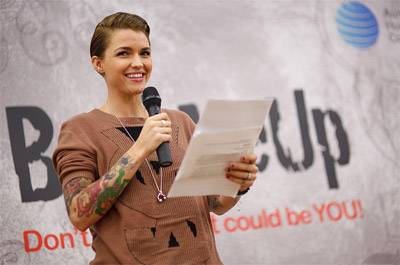 As Ruby Rose says, get snazzy with your camera and do your bit to stop cyberbullying these school holidays.

The Australian Human Rights Commission is calling for 13-17 year olds around the country to join the national BackMeUp Campaign and be in the running to win an an all-expenses paid trip to Sydney for a NIDA film-making course or some juicy JB HiFi vouchers.

"Our message to young people is don't stand by when you see someone being cyberbullied, it could be you," Commission spokesperson Dr Helen Szoke.
"We want young people to make a short two minute video on their phone or video camera showing how they can back someone up who has been cyberbullied," she said.
"Not only are there great prizes up for grabs like the opportunity to learn filmmaking at the world famous National Institute of Dramatic Art while staying at the award-winning Sydney Harbour YHA, but the videos will be played on the special BackMeUp site and used in education programs by the Commission and our partners and stakeholders.

Dr Szoke said research shows someone else knows or sees cyberbullying in 87 per cent of bullying situations among young people, and can be 'part of the problem or part of the solution' according to whether their actions support or discourage bullying.

"Although research indicates that most students dislike and disapprove of bullying and would like to see it stop, less than 20 per cent of students intervene to help the person being bullied," Dr Szoke said.

"This is a fantastic opportunity for young people to get creative and use their skills and talents and show others how you can back someone up who has been cyberbullied.

"Most of all we want young people to just be there for each other, because doing nothing is wrong."

Ten places for a week long film-making course at NIDA are up for grabs with accommodation for winners and their parents at the award winning Sydney Harbour YHA. JB HiFi Vouchers will also go to weekly winners.

Entires close on 15 August.
Entering the comp and join the movement at www.facebook.com/2012backmeup and www.somethingincommon.gov.au/backmeup

Question: What is the BackMeUp Campaign?

Dr Helen Szoke: BackMeUp is a campaign that we've introduced at the The Australian Human Rights Commission focusing on kids who see other kids cyberbullied. BackMeUp encourages people who see others being bullied to do something and not just let the kid be cyberbullied. A lot of kids do not know how to intervene and they are worried about recriminations or pay backs to them if they step in when they see bullying occurring. BackMeUp is saying that you can intervene as there are very simple things that you can do and you can choose how you intervene. The BackMeUp message is, whatever you do, don't do nothing do something to help people who are being cyberbullied.


Question: How should students intervene if they see another person being bullied?

Dr Helen Szoke: We encourage kids to talk to the person who is being bullied and reassure that person that it's not their fault. We encourage them to tell someone about what is occurring even if it may not be a person of authority, immediately, because they're not confident enough yet.

We suggest taking a screenshot or photo, if possible, of the bullying messages and encourage the person who is being cyberbullied to keep a record. If there are violent messages we strongly encourage them to report it to authorities, immediately.


Question: How can 13-17 year olds take an active role to help prevent cyberbullying with this competition?

Dr Helen Szoke: We have a fantastic competition running that targets 13-17 year olds which asks them to make a mini movie (about 2 minutes long) showing how they intervene if they know someone is being cyberbullied. We have weekly prizes as well as a final prize for the winning entry.

We think the competition is a terrific way to allow young people to identify the best way to teach other young people how to intervene when they know someone is being cyberbullied.


Question: What things are you looking for in the competition video entries?

Dr Helen Szoke: We want to hear and see from young people how they think they can best get the message out that you shouldn't standby and do nothing when other people are being cyberbullied. This campaign is really saying that young adults know what will resonate with other young people and we really want to see a whole collection of videos such as sad, funny, serious, edgy and creative. We will look at all videos because we know that every kid responds differently to different messages although the clear message is 'don't stand by, back someone up, if they are being cyberbullied'.

The public will be able to view these videos on YouTube and they will be linked from the BackMeUp website: www.somethingincommon.gov.au/backmeup and this is another great way of spreading the value of the message.


Question: What are your tips for parents if they wish to bring up the topic of cyber-bullying at home?

Dr Helen Szoke: There are tips on the BackMeUp website that are good for parents, siblings and friends. I'd like to encourage parents to visit the website www.somethingincommon.gov.au/backmeup.

Cyberbulling is done in quiet places in quiet ways and often parents won't notice a change in their child's behaviour even if they're a little bit quieter or reserved as it is passed off as hormonal. Parents need to look at the website and talk to their kids about the website and that way if their child is being bullied, the home can be a safe environment where they can open up and talk to members of their family. Parents could also bring up the competition and then they can bring the topic out into the open and chat about it.

We hope that we have enough coverage to the public with this campaign that the kids who are likely to be tempted to cyberbully might think twice if they know that the rest of the population is encouraged to dob them in.


Question: What is the impact of cyberbullying on a person's mental wellbeing?

It's not the technology that's the problem; it's how we use it. We want to empower young people to control technology in a safe way and ensure that they know it's their right to use that technology and feel safe.