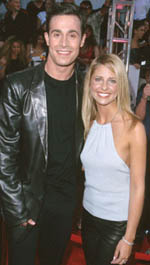 THE PRINZE CATCHES SOME SUMMER FUN

What with his engagement to Buffy's Sarah Michelle Gellar and his recent gig in Australia shooting the anticipated 'Scooby-Doo', Freddy Prinze Jnr is one busy Hollywood star. He also has a new flick on the horizon, the baseball-themed romantic comedy 'Summer Catch'. Prinze talked to Paul Fischer about Sarah, stardom and the pitfalls of spending several months in Australia.

Freddy Prinze Jnr appears to have lost much of his trademark thick hair. Now with shaved head, Prinze says it was a result of the blonde locks he donned making Scooby-Doo in Australia. At the end of the film [Scooby] my hair turned into straw, because I had to get it bleached every week, so at the end of the movie I decided to shave it bald. Prinze spent several months in Queensland shooting the big-screen incarnation of the popular 'toon series, in which Prinze is Fred to Sarah Michelle Gellar's Daphne. Audiences will finally get to see the 25-year old teen heartthrob in a very different light. Yeah I get to do comedy - and full out comedy - which I'm sure people are going to like a lot.

Prinze came to the Scooby-Doo project well prepared, to say the least. I have every Scooby-Doo episode ever made on tape, even the bad ones they did in the eighties, Prinze laughingly admits. In the big-budget movie, everyone is pretty damn close to the cartoon characters we play. Though Freddy enjoyed the experience of working 6 months in Australia on the film, at the end of the day, as awesome as Australia is, I'm an American, and I NEED to be in America, despite how incredibly kicked back the Aussies are. What he didn't like was working on Queensland's Gold Coast. I love good food, and they have really lousy restaurants, except the odd Chinese place. But I'm a HUGE Italian food fan, so Sarah and I used to fly to Sydney on every weekend that we could, and we were outta there. For the record, his favourite Italian place was Otto, in Sydney wharfside suburb of Woolloomooloo. 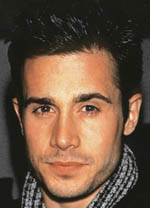 At least Freddy had Sarah to keep him out of trouble during the lengthy shoot. Yeah working with her was awesome, and makes the whole environment much easier.

Prinze has come a long way since making his screen debut at age 20-- kissing Claire Danes in 1996's 'To Gillian On Her 37th Birthday'. One of Hollywood's biggest teen stars, Prinze says that he doesn't have a problem finding characters in these teen genre films that are different from those who came before. I feel awesome about it, because I've always been able to find characters that are different, so even if my film was similar to another one, my character was always different.

Prinze hopes his new film, 'Summer Catch', goes beyond the core audience of teens who have been with the young actor throughout his career. Prinze plays a troubled minor league pitcher who is saved by his love of the game, not to mention his love of a rich rebellious girl (7th Heaven's Jessica Biel). This character was certainly very different to anyone else. It was right on the page that he's a firecracker and when he gets upset he just explodes, and I'm just the opposite, so it was good to be able to yell and scream at people, because I never do.

Prinze, who comes across as quietly contemplative, says that nothing upsets him anymore, not even the press, paparazzi, or even bad reviews, of which he's had his share. I think I'm a really good actor, one who gets better at the end of every movie to when I started. I'm constantly getting better and learning; if I read a great review about me, I don't care and it doesn't make me feel particularly good about myself, because I already do. On the other hand, if I read a BAD review I don't care either, because it doesn't change the way I feel about my work. I KNOW my work's really good, or I wouldn't move on once they say 'cut'.

Prinze adds that he doesn't act to please anybody, but because I really love it and I get to play cowboys and Indians and never have to grow up. No wonder he acts like a big kid as he boyishly talks about playing a baseball pitcher in 'Summer Catch'. I got to work with some of the best pitching scouts and coaches in the country to make sure my pitch was perfect, in that you SAW me throw that sinker, you see where my hands are and you know that I'm throwing a sinker. I felt like a little kid every day doing something like this.

It's the fantasy element of movies that clearly inspires young Freddy. If he had his way, he says he would have made an awesome Spiderman. I really want to be a cool superhero. Baseball pitcher and Fred in Scooby-Doo will just have to do for now.