Jay Russell The Water Horse: Legend of the Deep Interview 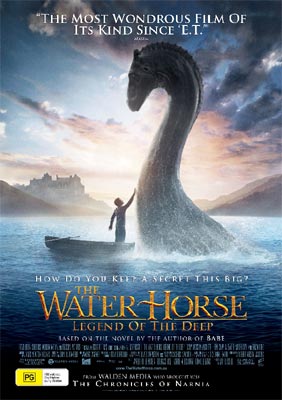 Director Jay Russell has gone from the endearing My Dog Skip to Ladder 49 and is back in family territory with his whimsical The Water Horse film. Paul Fischer caught up with him for this exclusive interview.


Paul Fischer: So let me just start, right off the bat by asking you, where you found this book?

Jay Russell: Well, this is one of those projects that came to me a number of years ago. In fact I was trying to figure it out exactly the other day and I think it was seven years ago, I'd say the project originally was dropped on my desk. And interestingly it was brought to me by Harvey Weinstein, who had the project at that time at Miramax and Harvey had been a fan of, of my film, My Dog Skip, which had just come out at that point who thought that this would be a good project for me. So I read the script first, which I fell in love with immediately and then went back and, and read Dick King-Smith's book afterwards. Usually it might be the other way around, but in this case, that was the way it went down. And then, for various reasons, mostly for visual effects costs, reasons at that time, Harvey ended up deciding that it was just gonna be too expensive for them so the project got shelved.

I was disappointed and heartbroken because I really wanted to do it and then, I went out and I made two other movies in the meantime. After I finished Ladder 49 I was looking for something else to do and I just wasn't responding to, you know, things I was reading, for whatever reason. I was literally standing in my office one day looking up at my book shelf, and there sat The Water Horse script, because I had kept it. I just picked it up and read it again and fell in love with it all over again. And that started the process and I just decided I was gonna try to get it made.

In the long run, it's a good thing that, it, it, was shelved and took this long, because I was able to do so much more in the visual effects world, now, than I would have ever been able to seven years ago, particularly at the cost I was able to make the movie. It was kind of a long winded answer, but that's the story.


Paul Fischer: There are so many fantasy films involving children. What do you think sets this one apart from, from the norm?

Jay Russell: Well, I think, what this movie has, I hope that separates it form the norm, is I think it's a very unique way of storytelling. Bob Jacobs, who adapted the book has got a unique way of telling the story. It goes in and out of flashback, it's told as a tale from someone's perspective who experienced this creature, in the past. I think it's got strong themes to it, life themes, that you might not have in what is normally described as kids' movies or whatever. I think we've got something for adults and kids to chew on and I hope that it's just a really well-rounded film going experience. I hope that that's what people are gonna be surprised by in this film. I think they're gonna get more than they expect when they see the movie.


Paul Fischer: How, do you enjoy working with the special effects? Or was it very daunting?

Jay Russell: Well, I worked with a lot of practical effects in Ladder 49. I mean in that film, basically everything you see in that film, we had on the set. In this case, it was just the opposite. And while I had a basic understanding of, of, of how to put one of these things together, really, to get in there and work hand in hand with Weta was like going to school all over again but in a fun way. And we did post production down in New Zealand specifically so that I could work closely with them and it was great, because I was there, by the end, I think they really embraced me as one of, their own. I mean because I was spending every single day over there, sitting at the computer with them, you know.

They, and we were able to make suggestions back and forth. There wasn't just a one way street of Weta saying, "No, we're gonna do this." I mean it, it, it got to the point where I was literally working on the computer with him and saying, "Oh, well, what if we did this and what if we did that." So it, it was a really exciting process. I, I loved it. In fact, I, I, in a way, I feel like I just scratched the surface, with this film. I would love to, to, you know go into even a larger arena into that world, now that I feel like I, I've really worked in that world and I've worked with some of the best people in that field in the world. So it, it was exciting.


Paul Fischer: Would you consider doing a sequel?

Jay Russell: Well, I'm more of that vein of, if you're gonna have a sequel, it should all be planned in advance, you know? Where like the Godfathers or like Lord of the Rings or whatever, where, where it's all been thought out, whereas this one has a very specific ending, that says something about the circle of life. And that's basically the point of the ending, but I don't know that I would, just because I feel like I've sort of said what I wanted to say in that one movie.


Paul Fischer: What would you consider doing next? Do you wanna do something very different now?

Jay Russell: That's my inclination. You never say never to anything, but, my inclination is, to do something just completely different. I have looked at, a romantic comedy, which I've always kind of had an idea of, of, wanting to do and then there's this really violent Western that I was looking at that I thought might be fun. You know, I mean it's that thing, is with most directors and actors and anything else, you try not to repeat yourself. And so I'd love to do something just wildly different next time.

The Water Horse: Legend of the Deep

From Walden Media who brought us THE CHRONICLES OF NARNIA and based on a novel by the author of BABE, comes the big screen magical motion picture, THE WATERHORSE: LEGEND OF THE DEEP. Rooted in one of the most enduring and intriguing legends of our time, the story begins with an enchanted egg...and what hatches sets in motion an adventure that takes a young boy on an unforgettable journey of a lifetime, THE WATERHORSE: LEGEND OF THE DEEP is wonderful entertainment for all ages.