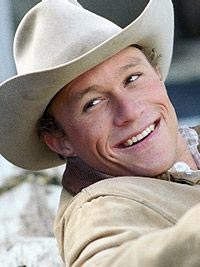 Heath Andrew Ledger (April 4, 1979 - January 22, 2008) was an Australian actor, Born in Perth, Western Australia, Australia, died age 28.Height 6' 1" (1.85 m) After appearing in television roles during the 1990s, Ledger developed a Hollywood career. Heath Ledger starred in both critical and financial successes, including The Patriot, Monster's Ball and Brokeback Mountain (for which he received an Academy Award nomination), and completed the role of The Joker in the forthcoming The Dark Knight. Heath Ledger was found dead in a New York City apartment on January 22, 2008.

According to the New York City Police Department, Heath Ledger was found dead at his apartment (which took up the entire 4th floor), owned by Mary-Kate Olsen, in the SoHo neighborhood of Manhattan on January 22, 2008. He was found face down with pills near his body, and police report that they have no reason at this stage to suspect foul play.

Medicated prescription sleeping tablets were found in his room but the determination of the cause of Heath Ledger's death will not be made until an autopsy is completed by the medical examiner. No note was found and the pills were not scattered

Many actors & actress suffer from the pressure of celebrity status and look for alternate means to fill the void or deal with the pressure. It's a great loss to lose such a talented Australian Actor such as Heath Ledger. It's still unclear whether it was accidental, but it's a wake up call to read labels carefully when self prescribing.

I first met Heath Ledger in the winter of 1998. It was nighttime, and a young ex-TV star was on the set of his first film, Two Hands, the laconic Australian gangster films. He was 18, fresh faced, shy but embracing the future. We were in the Sydney suburb of Kings Cross and Heath Ledger had a cigarette dangling between his fingers. I remember him telling me how much he loved acting and how much he was looking forward to his first Hollywood role opposite Julia Stiles in 10 Things I Hate About You. Life was going well for the then 18 year old. Over the years we had done countless interviews throughout his evolution as an actor. You put two Aussies together and the conversation is different to the usual interview. Even with the success he attained, there was nothing pretentious about Heath Ledger, nothing even gloomy or despondent as some are suggesting. Ferociously intelligent and very private, Heath Ledger was always impassioned about his work, and I remember not long after Matilda was born, he was clearly the doting father.

We got along because I was never intrusive into his private life and we had a similar, cheeky sense of humour. That side of him was rarely exposed in the media, because Heath Ledger never courted publicity and hated the process. The last time we saw each other was at the 2006 Toronto Film Festival where he was promoting the Australian film Candy. Yes, ironic that he was starring as a drug-addicted artist, but his performance in that film exemplified his individual artistry. We were sitting in a quiet corner restaurant joking away as we usually did, and he spoke about his daughter and how fatherhood impacted on his choices. "Matilda is just awesome and being a father has also helped me become even more selective now with work because for me, to go away from home for a day, let alone five, is tough,"

We also talked about his latest role, that of The Joker in the new Batman and his initial reluctance to take it on. He says that ordinarily doing something like that would not be of interest to him. "I actually hate comic book movies, like f***ing hate them, they just bore me shitless and they're just dumb. But I thought what Chris Nolan did with Batman was actually really good, really well directed, and Christian Bale was really great in it."

Those who barely knew him will write much about Heath Ledger and there will be endless speculation over his tragic passing, but at the end of the day, he was an audacious talent, a smart human being with a zest for life and a passion for his craft. He was a doting father, and in the 10 years I knew him, I marvelled at his personal and professional evolution. Rest in peace mate, you'll be sorely missed.

Heath Ledger was born in Perth, Western Australia, the son of Sally Ledger Bell (née Ramshaw), a French teacher, and Kim Ledger, a race car driver and mining engineer. Heath Ledger's mother is descended from the Clan Campbell of Scotland and his father comes from a family well-known in Perth. The Sir Frank Ledger Charitable Trust was named after his great-grandfather. Heath Ledger attended Marys Mount Primary School, in Gooseberry Hill, and later Guildford Grammar School and its preparatory school of the same name.

Early career
At sixteen, Heath Ledger sat for early graduation exams, and left school to pursue an acting career with girlfriend Jenna Sorrell. With his best friend, Trevor DiCarlo, Heath Ledger made the cross-country drive to Sydney. He returned to Perth for the TV series Sweat (1996), in which he played a gay cyclist.

2000-2008
Heath Ledger starred in The Patriot, Monster's Ball, A Knight's Tale, Ned Kelly, The Order, and The Brothers Grimm. In 2001, he won a ShoWest Award for the Male Star of Tomorrow based on his performance in The Patriot, and worldwide release of A Knight's Tale. In 2003, he was named one of Australian GQ's Men of the Year for acting.

In 2005, Heath Ledger received a "Best Actor in a Drama" Golden Globe nomination for his acclaimed performance in Brokeback Mountain, in which he plays Wyoming ranch hand Ennis Del Mar, who has a love affair with aspiring rodeo rider Jack Twist, played by Jake Gyllenhaal. In the New York Times review of the film, critic Stephen Holden wrote:

"Both Mr. Ledger and Mr. Gyllenhaal make this anguished love story physically palpable. Mr. Ledger magically and mysteriously disappears beneath the skin of his lean, sinewy character. It is a screen performance, as good as the best of Marlon Brando and Sean Penn."

Heath Ledger as The Joker in 2008's The Dark Knight.In another review in Rolling Stone, Peter Travers wrote:

"Ledger's magnificent performance is an acting miracle. He seems to tear it from his insides. Ledger doesn't just know how Ennis moves, speaks and listens; he knows how he breathes. To see him inhale the scent of a shirt hanging in Jack's closet is to take measure of the pain of love lost."

Heath Ledger received "Best Actor of 2005" awards for Brokeback Mountain from both the New York Film Critics Circle and the San Francisco Film Critics Circle. Heath Ledger was also nominated for an Academy Award for Best Actor for his performance. In the same year, Ledger played a fictionalized version of Giacomo Casanova in Casanova. The film, a romantic comedy which co-starred Sienna Miller, drew mixed reviews from critics and failed to find a significant audience among general moviegoers, though it fared better on DVD.

In 2006, Heath Ledger was invited to join the Academy of Motion Picture Arts and Sciences. In 2007, he was one of six actors to portray different sides of singer Bob Dylan in the film I'm Not There.

On July 21, 2006, Heath Ledger was officially confirmed to play iconic comic book villain The Joker in The Dark Knight, the sequel to the 2005 film Batman Begins, opposite fellow I'm Not There star Christian Bale. The film is set to debut on July 18, 2008.

Heath Ledger was filming The Imaginarium of Doctor Parnassus at the time of his death.

He had directed and produced Australian artist N'Fa's work, including his video "Seduction is Evil".

In 2006, Heath Ledger directed three music videos: "Cause an Effect" and "Seduction Is Evil (She's Hot)" for Australian hip-hop artist N'fa, as well as "Morning Yearning" for Ben Harper.


Heath Ledger had a relationship with Naomi Watts, whom he met in 2002 during the filming of Ned Kelly. They started dating in August 2002. The couple ended their relationship in April 2004. Previously, he had dated actresses Lisa Zane and Heather Graham.

In early 2008, Heath Ledger was reported to be seeing model Gemma Ward after media articles linked the two together at end of 2007 holiday celebrations.