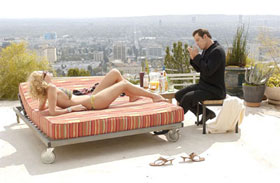 Each time John Travolta walks into a room, no matter how often one interviews the actor, one remains all too aware of his 'cool' factor. Travolta remains the perfect choice to play Chili Palmer in both Get Shorty and its long awaited follow up, Be Cool. Yet, as he courts the media with typical charm and charisma, Travolta is unsure whether in real life, he could ever be friends with his fictional alter ego, "because I don't know how much I have in common with him. He's a cinematic character and willing to be literally fearless. I certainly like him and I love watching him, but he's like Sean Connery in James Bond and I loved James Bond and Sean Connery. But I don't know how much Sean Connery is like James Bond, so it's a very interesting question and I don't know where to go with it."

Be Cool follows the continuing adventures of Chili Palmer, strong-arm debt collector turned Hollywood movie producer. By the time the story begins, Chili has abandoned the fickle movie industry, so his adventures, this time around, concern the music industry where he becomes the promoter of a struggling singer who is being pursued by the Russian mafia, shady managers and gun-toting music producers. A decade since Travolta hit pay dirt with Get Shorty, the actor explains why it took this long for the sequel to bear fruit. "The reason it took as long as it did was Elmore Leonard was quite inspired by the original movie. Of course he wrote the book, 'Get Shorty,' and they adapted that, but because of the movie, he decided that he wanted to a sequel book called 'Be Cool.' So it took him several years to do that, and when that was done, then the bright idea of doing a movie from that happened. So it was really Elmore's timing on that, because I don't think I would've ever wanted to do a sequel arbitrarily. You have to have a good reason to do one, so I caught on when he caught on."

While Chili personifies cool, he is more observant than participatory. Travolta sees the character as a "kind of an American version of James Bond in a way - street James Bond." Yet Travolta had to tap into his coolness to play the role. "But cool is an interpretive thing, but I think in the case of Chili being cool is that he's fearless and smart enough to handle any given situation and perceptive enough to handle a more sensitive situation. So he's cool in that he's got it made, but of course he's just structured that way," he says, laughingly. "We put him in these situations where he can be the ultimate non-responder or the ultimate clever mover, so when we have a set up like that, as long as you're convinced of how to portray it, it's quite fun." 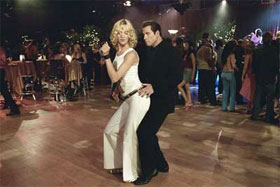 A practical joker and one of the loosest actors in Hollywood, Travolta admits that there has always been a "mischievous child in me," which gets him in trouble on the set. "I used to get in more trouble, but age seems to give you some ethics presence, so you get away with it a little more. You know, the 60's were filled with sugar highs and crashes, as well, so I was probably a classic child of the 60's, yet just kind of rambunctious and creative. I would channel that energy into performing a lot, but if I wasn't able to perform, watch out, " he adds laughingly. "But I am filled with the spirit of play and that makes me happy. I almost can't work on a set if I'm not having some fun and the best verification of that or validation of that was when I met Marlon Brando and much to my surprise, he was identical in his spirit of play. He mostly just wanted to have fun and fool around, play games and play question answers. And I thought, 'Oh, okay, maybe I'm not so far off the idea here.' "

Next up for Travolta is a change of pace. "Next is a movie called "Lonely Hearts" with James Gandolfini, a drama about two detectives." But the actor rules out categorically a reunion movie of Welcome Back Kotter, or a Grease3. "Let's not go there", he finally exclaims. 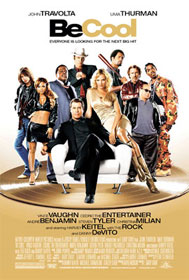