SAMBERG IS A HOT ROD.

THIS WAS ORIGINALLY A WILL FERRELL VEHICLE?

Andy Samberg: Yeah, it was developed for him.


WHAT MAJOR CHANGES DID YOU MAKE TO THECHARACTER?

Andy Samberg: One part, which was the biggest shame, was stripping out the things which were very specific to Will. The one thing I keep saying about this movie is - the only shame about the fact that we got to do it was that I never got to do the version with him in it, because we're such huge fans of his. But we kind of took it down to square one and then built the character in a way that I felt comfortable performing in and in a way where we thought I could get laughs doing it. So it didn't just look like I was doing an impressionof Will.


HOW COMFORTABLE ARE YOU WITH PHYSICAL COMEDY?

Andy Samberg: I'd say quite comfortable (laughs). I mean I've always been willing to throw myself around, and the plot of this movie called for it quite a bit, so I was happy to do it, yeah.


COMING FROM ONLINE, WHAT OTHER COMEDY GROUPS DO YOU ADMIRE?

Andy Samberg: I mean a lot of the stuff we watch on line are people who are on TV, interestingly. Like Tim and Eric, Awesome Jo). Amazing. Totally bizarre. Before we started out, we always watched those Stella shorts on line. Those guys are fearless, bar none. And I like that dude who does Shoes and Muffins. He's a weirdo. I like those. 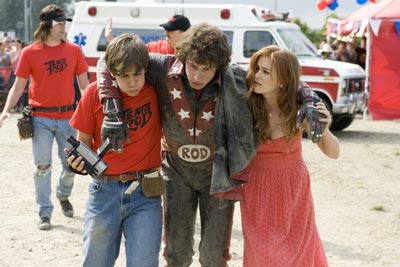 HOW HAS UTUBE CHANGED COMEDY?

Andy Samberg: I don't know that it's changed comedy so much as the business of comedy. I mean it's definitely been helpful for us. The irony obviously is that we were working on doing stuff on the Internet for five years, and then we got on SNL and then all of a sudden something we did not network television became an Internet thing. But you know our story and a few others like hours have sort of opened that door in terms of people that are in a position to make legitimate stuff now are looking through the Internet for people. It's another option to stand-up and improv and stuff. You can find people there who are legitimately talented. It's pretty easy to spot - when you watch something online and it really makes you laugh and then you watch one other thing by these people and it also really makes you laugh, there's a good chance they know what they're doing. Because it's a lot harder than it seems.


ARE YOUR COMIC SENSIBILITIES ALIGNED WITH THE QUIRKINESS THE INTERNET ALLOWS . . .THAT MAYBE THE MAINSTREAM WOULD HAVE HAD A HARD TIME GETTING IT?

Andy Samberg: I mean yeah, you can definitely get away with weirder stuff on the web. Because it's not as much like a carpet bomb atmosphere. Know what I mean? If you're on a network show, there's a way more people who are just going to be watching by chance, whereas, on the internet you're going to get said something specifically because somebody thinks: Oh, you know who will like this? Bob. And Bob sure enough will more than likely like that thing which they got set because people know their tastes. Or if you're the sort of person like - know what I really want to see? A monkey scratching its butt. You look specifically for a monkey scratching its butt and whatever footage there is of that on line, you're going to get exactly what you want. So it's easier for stranger, more offbeat stuff to find an audience on the Internet because it finds its audience exactly. Whereas as soon as you put that stuff on network television, it stands a much greater chance of being like: what the hell is this? This isn't for everyone. This is for those few people.... 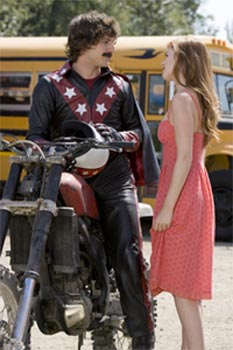 WITH SNL, YOU REALLY BROUGHT ATTENTION BACK TO THE SHOW, PEOPLE TAKING NOTICE. WHAT WAS IT LIKE BRINGING YOUR COMIC SENSIBILITIES TO THAT ENVIRONMENT?

Andy Samberg: It's been great. We kind of stumbled into doing the digital shorts just by the nature of what we'd been doing before we got there. Akeela and I shot this thing, Bing Bong Brothers, on their own and showed it to the producers, and they were like: Would this kind of stuff be cool for the show? Sure, we're always looking for pre-taped stuff. Mainly because . . . there's two live sketches, they need something to cut to so they can swing the sets around. That's how it starts. So we went around and shot stuff and they liked it enough and we found at least for now a nice little niche . . . Especially for me because I'm in a cast that hits something we're much more comfortable with. It's something we've done more.


WHO ARE SOME OF YOUR OWN COMEDIC INFLUENCES?

Andy Samberg: It's a long list. Like a lotta, lotta stuff. It's pretty broad. The one connection you find is that it's all ridiculous stuff. Growing up, I loved Mel Brooks films and Monty Python. I watched a lot of I Love Lucy and Marx Brothers. Then I really got into like Zucker Brothers stuff, Pee Wee's Big Adventure and that kind of stuff. Then there were early Sandler films and Chris Farley, like Tommy Boy. Really a big fan of the guys who did The State and Hot American Summer and Strangers In The Candy and Mr Show . . . Bottle Rocket, the Wes Anderson movies, stuff like that.


ARE YOU INTERESTED IN NOT JUST DOING FALLING DOWN A BARREL STUFF BUT ALSO SCRIPT-BASED COMEDY, DIALOGUE-BASED?

Andy Samberg: That's an interesting thing because in my opinion Hot Rod has both. Like I think a lot of people - it's really easy to take one look at Hot Rod and one look at the trailer especially and be like - oh, I get it, it's one of those. You know what I mean. It's that one-note smash in the face and laugh because the guy gets hit in the balls. But I feel there's a big comedic range in the film. There's a lot of weird tangential sort of - I wouldn't goso far as cerebral, but ...... 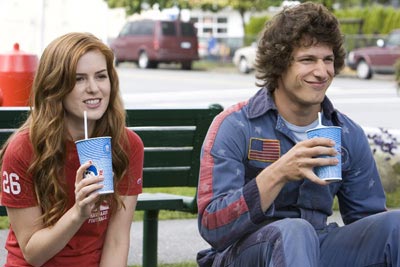 BUT THIS SCRIPT IS PRETTY SMART . . .

Andy Samberg: Yeah, I think there's a lot of different kinds of comedy in the movie, and I think that's a reflection of the fact that obviously my list is very long. We are influenced by a lot of different kinds of comedy, and we enjoy different types, so I think it's good to have a little more of a broad touch, so people have a sort of avenue into the film - Oh, I see - and then they can get on board and enjoy the rest of the weirder stuff. But we're so deep into comedy that we don't like to make anything that doesn't have a few levels to it.


WAS IT IMPORTANT TO ENSURE THAT DEGREE OF COMIC DIVERSITY (ESPECIALLY THE OFF-CENTRE STUFF) IN THIS FILM?

Andy Samberg: Yeah. I mean definitely. And one of the reasons we were really excited and felt good about it was that Paramount when on record at the beginning as being cool with us doing that. I mean they were like - we feel like you guys have your own style.

Amateur suburban stunt man Rod Kimble (SATURDAY NIGHT LIVE's Andy Samberg) believes he's destined to follow in the footsteps of his late father, who made test runs of Evel Knievel's stunts before the better-known daredevil repeated them and took all the glory. Kimble risks life and limb strictly for fun and the entertainment of the neighborhood kids, but when his macho stepfather, Frank (DEADWOOD's Ian McShane)--who repeatedly beats and belittles Rod in basement sparring matches--develops a life-threatening heart ailment, Rod attempts the biggest jump of his career to raise the $50,000 necessary to get Frank a heart transplant so that he can have one last chance to fight Frank and prove his manhood.

HOT ROD establishes its mission statement early on when Rod pedals his moped past a Salvation Army thrift store in his sloppily hand-decorated costume. Seemingly inspired by NAPOLEON DYNAMITE, THE KARATE KID, and the HAPPY DAYS episode in which the Fonz attempts to jump his motorcycle over 14 garbage cans, director Akiva Schaffer (Samberg's longtime cohort in the online comedy venture THE LONELY ISLAND) sets Pam Brady's (TEAM AMERICA: WORLD POLICE) screenplay in what seems like the mid-1980's (complete with Europe-heavy hair metal soundtrack), though allowing for the existence of the Internet and Vitamin Water. The simple plotline is merely a jumping-off point for a series of failed stunts and often hilarious non-sequiturs. Samberg is likeable in his first starring role, but he is more than equaled by a supporting cast including SNL's Bill Hader, Danny McBride, fellow Lonely Islander Jorma Taccone, and Isla Fisher (WEDDING CRASHERS), who comprise Rod's loyal crew. McShane chews the retro scenery when onscreen and the always-welcome Sissy Spacek lends credibility to the proceedings in her few scenes as Rod's mom. 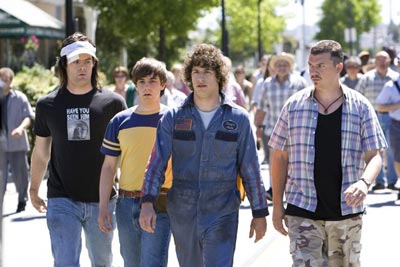 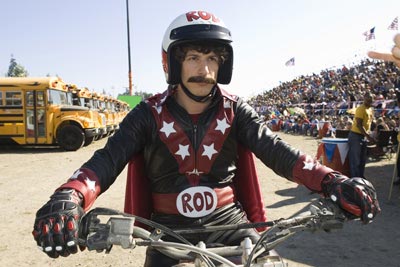 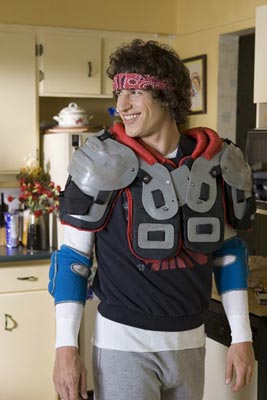