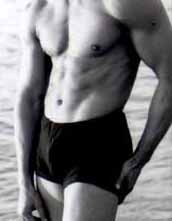 Have you ever wondered what kind of thoughts and opinions race through the male mind when it relates to 'girly' topics? Well wonder no more! Girl.com.au brings you 'My Boy', where we ask the questions in the hope of gaining an insight into the male mind.

This month we couldn't resist the charms of Christian Argenti from Invertigo! We placed him in the hot seat and grilled him on stuff that really matters to us gals! Read on for all the goss on this spunky guy! 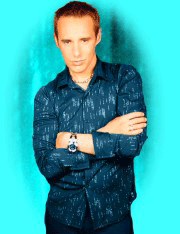 Fave Food: Italian
Fave Film: The Godfather
Fave Band(s): The Rolling Stones, Kiss
Describe yourself in 3 words: Musical, messy and easy-going.
Best Feature: I'm very humanistic, compassionate and tolerant.
Worst Feature: I'm full of bullsh__ too!
Person you would most like to meet: Nelson Mandela
Hobbies/Interests: Going out, shopping and watching movies.
First Job: Played in my first band when I was sixteen.
A talent you wish you had: Some people would say singing!
The best advice given to you: Always be 100 per cent prepared and organised and take everything seriously. And just when you think you've got things nailed, you can always improve on that 10 or 20 per cent.

Christian: It depends - if someone can get it happening without makeup then great!

Girl: Now, do you prefer brains or beauty?

Girl: What is the worst pick-up line you have heard?

Christian: Here is 40 cents. Go and call your mum and tell her that you won't be coming home tonight.

Girl: So what turns you on?

Christian: Someone who laughs at my jokes!

Girl: What turns you off?

Christian: If I try and engage someone, and crack a few jokes and then they look at me with a weird expression or the "I don't get you face", I must admit that turns me off. Not that my sense of humour is that sophisticated, but it's still a turn off.

Girl: Who is your ideal woman?

Christian: Someone who is fairly beautiful, has a little class and that I would be proud to stand beside.

Girl: Are you a boxers or jocks guy?

Girl: What was the most memorable moment about your first date?

Christian: Well her parents actually paid for it so I just went nuts and ordered everything. I must admit I felt a bit sick afterwards but I knew her really well and I even got a little kiss from her, which is pretty cool for a thirteen year old! (laughs)

Girl: Do you hog the remote control?

Girl: Are you a speedos or board shorts kind of guy?

Christian: I must admit I'm a board shorts guy, I think the whole speedos thing is a bit uncool these days! (laughs)

Girl: What is under-rated in this world?

Christian: Just being able to lie in bed with someone really nice, and spend the day having a little kiss and cuddle and not have to be anywhere.

Girl: What is over-rated in this world?

Christian: Picking up and having one-night stands, and the following day feeling quite stupid about having done that. That whole thing is really over-rated. I prefer to be home in my own bed alone after the first date.

Christian: Yes I think so.

Girl: What is your idea of a romantic date?

Christian: First of all, somewhere really open and not too private. Sometimes the private thing indicates that you perhaps don't want to be seen. So I prefer somewhere big where you can have a few drinks, chat away and laugh. Then perhaps go out to a club and dance the night away!

Girl: Are girls obsessed with their body image, more so than guys are?

Christian: I think that guys are catching up as far as that whole thing goes. So I would say that from my perspective, guys are pretty obsessed too.

Girl: Do you believe in love at first sight?

Christian: Yes I do.

Girl: Are you a cat or a dog lover?

Christian: I like both but in general I'd have to say I'm a cat lover.

Girl: If you were told you had a minute to live, what would you do?

Christian: I'd set the record straight with a few people around me (not that they can do anything about it!)

Girl: Who is the bigger flirt? Guys or Girls?

Christian: I think girls definitely are because guys don't know how to flirt!

Girl: Does vanity exist in males?

Girl: Do you believe in astrology?

Christian: Yes I do but it doesn't necessarily mean that I'm interested in it.

Girl: Do you believe in fate?

Christian: Yes I must admit I do.

Christian: Girls do but once again I think that guys are closing that gap.

Girl: How far would you go to win a girl's heart?

Christian: I would go the whole way and have attempted to do so in the past but it doesn't always necessarily come up trumps.

Girl: Why are many guys so reluctant to say I love you?

Christian: I don't think guys have the courage to say it in case the other person doesn't feel the same way back.

Girl: Do you like girls who play hard to get?

Christian: Yes I do.

Girl: If you could bring only three items with you to a deserted island, what would you bring?

Girl: Do girls who have been around the block too many times put guys off?

Christian: No not really because I like someone who is fairly worldly and has a little bit of life's experience. As Iong as I don't have to be constantly told about it, or people coming up to me and telling me stuff, then I don't really mind that, to be honest.

Girl: And a question that we girls have always wanted to know the answer to - what do guys talk about in the toilets?

Christian: Basically there is the talk of footy and other types of bizarre conversations that go on there. Some of which I can't really repeat but generally downright, simple, dumb conversation!

Girls if you have a question you would like featured in 'My Boy', please email boy@girl.com.au or any boys reading this; email us with your thoughts, opinions or issues relating to the girls in your life!