?Does My Bum Look Big in This??

How many times have you asked this question and received an honest answer? Well The The Real Deal.com.au gives women an opportunity get the truth, by confidentially posing questions on any topic to a panel of REAL DEAL men.

The The Real Deal.com.au is a unique proposition that exploits a gap in the market for women?s advice forums. It provides a high degree of interactivity and offers women an alternative to their girlfriends, giving them the chance to seek advice or an honest opinion from men.

Every woman in her life has questioned or been baffled by the behaviour of male friends and/or partners, and The The Real Deal.com.au offers a forum for getting a better understanding of the male psyche - direct from the source.

The website forum consists of four men one single, one in a new relationship, one married, and one divorced - representing the relationship stages that women might find themselves in. This will give women a chance to ask one man or ask all the men for their advice.

All four men are profiled on the site to ensure women that it is REAL, and that it is a confidential, non-threatening and anonymous environment.

The next time you feel the need to start figuring him out ask someone of the opposite sex. You will be surprised how much they can help you better understand what he is trying to say. 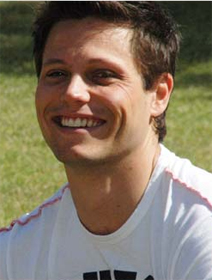 Meet Chris, he's 31, lives in Sydney and has been seeing his girlfriend for a year. I am a fairly driven person. I have been told that I am funny (esp. by my girlfriend) but I think I am more lucky with my humour than anything... I love talking with people and I have fantastic friends! Let's put him to the test.

Question 1:
My boyfriend & I have been going out for a year and 10 months. For the first year or so everything was absolutely perfect but, about 5 months ago he was busted by my younger brother for sending flirty messages to his girlfriend.. Shortly after, I found he was on a singles website talking to lots of girls inappropriately. His excuse for the flirty messages was that he was 'Testing her to see how far she would take it as she started it..' & begged me for my forgiveness... when I approached him about the website he denied the entre thing saying that it was an 'Old' one that he had 'before' we started going out. Not long after this he broke up with me, saying that he wanted to see other people.. 3 weeks later he starts calling me at 3am, coming to my house and sending me flowers asking for his forgiveness..why do guys do that? And because I truly do love this guy, after a month I took him back only if he promised to pull his act together. It was 5 months ago now and everything is back to normal, we are really really happy.. But now he has been talking about marriage alot lately, and I'm scared.. What do i do.. I love this guy? But I don't no if I can trust him 'forever'....?

Answer 1:
Woo!! I'm hearing you!! Firstly, why do guys do the whole beg for forgivness/floweres thing? I think sometimes guys, probably all of us live in a bit of a fantasy world. I know that I did when I was younger and sometimes still do. You know that place, where every girl is with Brad Pitt or Mr Darcy and every guy is sleeping with Angelina Jolie (in their own minds of course) or for me Evangalina Lilly! From time to time those lines can become a little blurred and the grass can SEEM greener on the other side. Especially around that time in a relationship where its not quite as exciting as it had been for the first few months. The thing is, often when a guy jumps that fence to roll in the green grass he finds out that its not all that green at all. In fact its that point that some guys realise just how good they had it! The begging and flowers thats them climbing back over the fence to your side!! As for marriage! Sure thats a big ask right at the moment. I would play it pretty cool, when he comments or talks about marriage joke that "he has a lot of making up to do before you will even consider it". Its going to be much easier to do it before he asks than having to say "no". If thats the way he really feels then he'll be in for the long haul! The good news is he knows how green the grass is with you! Some people, esp. guys have to learn lessons the hard way it sounds like you have one of those! Play it cool, have a good laugh and make him sweat it out! You'll know when you can trust him forever! Chris

Question 2:
When my boyfriend and myself go out he ends up leaving me and goes of talking to other females that he dosent know and I get really jealous and we end up fighting. He just dosen't talk to them he hugs and cuddles them has fun with them not me and buys them drink. I wish that we could go out and he could show me that attrention instead of staggering over to me when he wants to go home, but he dosen't see it that way he says he gives me enough attention at home. With saying that we both work different shifts I work late at night at a pub, him at the coalmines he plays footy every weekend, training twice three times a week, golf with his mates, sleeps alot the rest of the time. Whats your advice am I being unfair?

Answer 2:
Are you being unfair?... NO! If you are with someone, you are generally with them because you want to be, and you would hope, because you really like them and want to spend time with them. It seems to me that your "boyfriend" has a lot of priorities that he puts ahead of you. I do play sport and often do so without my girlfriend but I also make time to spend with her. We are also often busy and do have times where we don't see heaps of each other but during those times when we do get the chance to spend sometime together we make the most of it. My opinion? Discuss it with him sometime, NOT when you are out! Tell him how it makes you feel and how you would like to be shown that attention. Ask him why he shows other women that attention and not you? Tell him what the benefits of showing you that attention would be- crazy passionate sex! You will do...whatever? Don't stay to watch him chat up other women and then give him a lift home, you're not a taxi service!! If that dosen't work and you are still not happy I think you have to take a good look at his priorities and have a long think about how long you are going to put up with golf, football, sleep and other women coming before you!! Trust me! as a single guy there was nothing more sexy than a woman behind a bar! You are prime realty, if a guy can get away with it he will if he knows it's not on and he cares he will stop in the drop of a hat! Good luck! Chris

Question 3:
My boyfriend of 6 months broke up with me 2 months ago because he is in the middle of his competition season and doesn't have time for a girlfriend. We'd had no problems unitl this. His family love me and his mates have said I'm the best thing that's ever happened to him. I haven't initiated contact since, but he's been texting me every week to two weeks, asking what my plans are for the weekend, or what I've been up to, or happy valentines day. Whenever he texts I'm polite and text back. He's also called a couple of times. Last weekend he was away and called at 2am just to say hi (he was sober). I still have feelings for him and the fact he's spending a bit of time contacting me is making me think he's wants me back now his competion season is over. I don't want to put any pressure on him, but i also don't want to miss my second opportunity. What do you think he's doing?

Answer 3:
Wow! Clearly at the moment and in the past you have been his number 2 priority! I get the impression that you are wanting to be number one!! Right?!..And rightly so!! Sports people all around the world manage to compete at the most elite of levels and have full time relationships. I know personally a few, and most of those people don't think they could have achieved what they did without that support. My feeling is that he is probably testing the water, seeing how receptive you are to meeting up and possibly hooking up? In my opinion, I would see if he wants to meet up? No pressure, "you just want to hear how his season went?" and see what happens. If he is interested, I'm pretty sure you'll know. And if he is interested, take it easy and when it starts to get more serious let him know that you are interested in his sport, support him and show him how important you are to his success. There is a chance that over competition season you will have to settle for equal position with his sport but if he knows you are happy with this and he feels you add to his ability.. I think you'll have your man! Be confident and make sure he knows you will not settle for being his "off season" hook up.. maybe not on the first couple of dates! Good luck, Chris 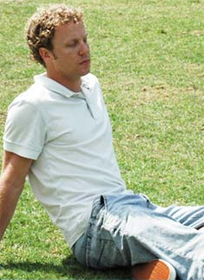 Meet Ben, he's 23 is Single and lives in Sydney. Last relationship was 18 months ago."I like to think that I have a good sense of humour and I love making people laugh, it's usually at me but occasionally with me. I'm spontaneous at times as well."
Let's put him to the test.

Question 1:
I have a friend who is 27 years old and has only ever slept with one man five years ago, only once. She is very insecure around men and really shy, she is always putting herself down because she hasn't got the size 12 figure or the model face. I tell her just be herself and don't be so shy but it's a non stop battle. Are men really after the size 12, 14 girl or has the size 20 girl have the same chance. Any advice you can give me to help her???
PLEASE

Answer 1:
There's definitely a lot of guys out there who aren't shallow and appreciate women for their personality just as much as their looks. You just need to look around when you are out in public to see how many people there are out there who don't look like models but have still found love. Tell your friend to have a look at this fact. There are also men who find different shapes and sizes attractive. A number of my mates are in this category. Also let her know that many men are just as insecure as women, their focus is not always on women's appearance. Basically your friend does just need to be herself, because guys find shyness and insecurity just as unnattractive as being slightly overweight etc. Good luck with your friend.