Synopsis: In order to survive the cruel winter months a young ﬂightless plover chick must take on a dangerous journey to fnd a legendary valley located in the heart of the highlands while trying to stay hidden from the ever-watchful eyes of a ravenous falcon who has been terrorizing his family and friends for years.

Every year countless of migrating birds return to their home country after travelling thousands of miles over the sea, among them is a congregation of plovers lead by Dad. Dad tries to keep everyone safe during the dangerous ﬂight but unfortunately some become prey to the ever-hungry falcon, Shadow, who has terrorized the lands for years.

This year Mom and Dad are blessed with an inquisitive and energetic chick who they name Ploey. With Dad's expert guidance Ploey learns to forage and during one of their excursions he meets Ploverina and they become inseparable, daring each other to explore and try out new things. Both of them dream of becoming the fastest plover and the next leader of the congregation. One night Dad is contacted by Skua, once a decoy for Shadows dastardly plans. Skua himself is going to join the cowards of Paradise Valley, where those who cannot make the journey oversea reside during the winter.

The plover chicks attend ﬂight school during the final phase of their training. As the chicks take ﬂight one by one, Shadow makes his move and grabs Ploey. Dad attacks Shadow so that Ploey can escape but perishes in an epic battle with the bird of prey leaving only a single feather behind. Ploey is traumatised and loses faith in his ability to ﬂy and won't leave his nest for the remainder of the summer. The day of departure arrives and Ploey tries for the final time to muster up courage to take ﬂight but it fails and he is caught by the local cat who takes him to his house. Ploey manages to escape the clutches of the cat but it is too late. Mom and Ploverina have left with the other birds thinking that Ploey has perished.

In order to survive, Ploey has to take on the journey to Paradise Valley. One day after narrowly escaping Shadow's clutches he meets up with the ptarmigan Giron, an experienced loner who is hell bent on having his revenge on Shadow after he killed Giron's family. Two form an unlikely friendship built of respect and mutual admiration.

Still unable to ﬂy, Ploey makes it to Paradise Valley where a group of outcasts has gathered for winter. As summer approaches he begins thinking about Ploverina who is leading the Plovers on their way back over the ocean, with Shadow waiting for them.

There is only one way to save his family and friends from the falcon's claws and that is to learn to ﬂy and be the plover his father taught him to be. 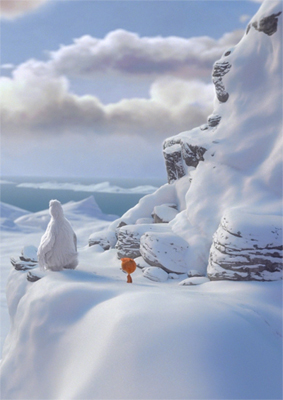 Ploey
From the moment he's out of his egg, Ploey, a happy and energetic plover chick. Curious of the world, and a naive, cute and charming little bird. He is determined to become, in due time, the leader of the plover ﬂock, just like his father which he adores.

When Ploey meets the charming Ploveria, fate seems to have decided that they belong to each other. They play and have fun, tightening the bond of their friendship and their love. When Ploey is starting his ﬂying lessons, the evil Shadow attacks, catching Ploey in his iron claws. His father sacrifices himself to save his son's life. Torn by guilt and sorrow Ploey spirals into a trauma, rendering him unable to ﬂy.

Ploveria tries to encourage him, but he refuses since his self-esteem is broken, but when a cat from the village catches Ploey, everyone is certain that he is dead.

Ploey managed to get away from the cat, but is alone after the plover ﬂock has migrated south for the winter. He sets off in the search for Paradise Valley, a mystical valley where he will be safe from the winter cold. On the way he meets Giron, who at first is harsh towards him, and Ploey is insecure but gradually Giron begins to protect and love Ploey, thus Ploey slowly returns to being energetic and confident.

During his stay in Paradise Valley Ploey realises that he needs to learn to ﬂy to save his friends and family arriving the following spring.

Giron
Was a rebel in his youth, aggressive, hostile and certainly not your conservative every-day ptarmigan. But when he fell in love, he fell deeply, and his Dove, as he called his wife lovingly, became his world. Their chicks were his pride and the source of immense joy and happiness.

He fought many brave battles to protect them and secure their safety and he never surrendered; until the day it was all taken away from him without the slightest warning, by the vicious falcon Shadow. Giron fell back into his aggressive, hostile persona, having learned that the only thing love will bring, is unbearable grief and pain.

The one thing that now keeps him going is his hatred for Shadow. When Ploey stumbles into his trap and ruins it, Giron is furious. But he soon realizes that he can use the little plover chick as a bait for the falcon. He promises to escort Ploey safely to Paradise valley, unaware that Ploey will soon win his heart over, ruin all his devious plans and awaken the loving parent that Giron used to be. 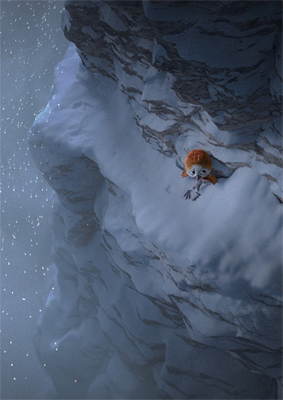 Shadow
Is the dictionary example of evil. However, first impression might suggest he is a well-educated and travelled creature, as his physique, tone of voice and vocabulary resembles a man of class and honour.

However, underneath those sophisticated feathers lies a devious, manipulated and utterly ruthless, predator who spares no-one. A beast that cannot, under any circumstance be trusted.

Ploveria
Is an energetic charmer. A girl with a true spark in her eyes, a bit of a tomboy in a way. Right from the start her heart goes out for Ploey and with her strong will and open heart she supports him and encourages in every way she can like a true and trusted friend.

Ploveria is not just a brave and stubborn girl, but she is also loyal to the bone. So once Ploey is left behind, as she migrates south, she never loses faith. Once she returns and realises Ploey survived, she joins him in the final fight and expresses that her love is so deep, that she is rather willing to fight till death do them part, then to stand by and do nothing.

Mousy
Is a super energetic little mouse, he got this quality about him that he is always optimistic and in a good mood. For him there are no problems or threats, only challenges that are fun to battle. He´s got drive and an aura that radiates with warmth.

Fox
Is a culinary artist, who´s main interesting and point in life is to make the perfect dinner. He chooses his pray carefully and spices it up with his exquisite collection of herbs that he collects in the highlands. While cooking he goes into somewhat of a spiritual come, where the whole world arounds him somewhat evaporates, as his focus on the cooking it total. To interrupt that holy moment of his, is a declaration of war.

Ploey's Mom and Dad
Dad's affection for Mom and Ploey is indisputable, but it´s tough love. Dad has inherited, from countless generations, the role of toughening up the young ones to make sure they survive and prosper in a cruel, cold, crazy world and he has no intentions of ending that heritage.

Dad might feel a little rough around the edges, but underneath he has a heart of gold, and his courage is undisputed. He is a cool and calm man, who carefully plans everything,

but when things heat up, he will be first to charge into the fight.

Is a Mom with an M bigger than the state of Montana. She absolutely adores Ploey her love for him is boundless, when Ploey comes into the world she is overwhelmed with joy. When Dad dies she becomes very worried for Ploey and is heart broken when she thinks she has lost Ploey too.

Skua
Was once an honorary student, but when writing his PhD on quantum physics – with emphasis on wormholes and interstellar travelling for birds, he stumbled upon some mushrooms that he thought would help him reach a higher understanding of space-time continuum and Einstein's theory of relativity, resulting in an 'out-of-feather' experience – from which he has never really returned.

Thus, Skua is some part in this world and some part in that other world somewhere. He is physically quick; at time almost neurotic in movements and speech, but his mind is much slower and needs good processing time to digest the simplest tasks sometimes. Thus, Skua happens to get confused and a little paranoid, or just simply spaced out, in the simplest of circumstance.

Colonel Wing
An ex boy scout and a retired fighter pilot from the air force, he has now taken over the ﬂight school. To apply Waldorf techniques into his teachings, by approaching each student on an individual basis is something that would never occur to him; instead he counts heads and throws the little ones literally into the deep end of the pool.

Sloey
Sloey is the typical 80´s prom king, quarterback, that thinks he's god's gift to women, but in fact is a pure-bred douchebag. Self-assure and full of himself, he thinks Ploveria will fall for his sleazy charm, but she knows better than to be fooled by such a superficial character. 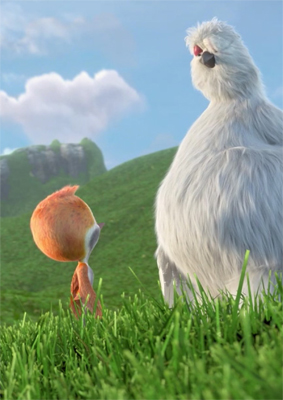 The Bunting Birds
Are a worriless group of lazy songbirds whose mental horizon reached the outskirts of the garden they live in. Even though their biggest threat, the cat, lives in their garden, it would probably never occur to them to move to the next house, where no cat lives at all. They like to talk, about nothing, and comment on all things, large and small, and can ramble on for hours on end. Yes, ignorance is bliss!

Deer
Deer is the protector of the tundra. He roams the frozen wilderness in search of those in need of help. He is a large, silent, humble, every day hero who expects no rewards or hoorays for his noble acts. He has been around for a long time and he has seen it all.

Sheep
Some say Sheep´s bloodline can be traced back to Bob Marley. If that is true or not is difficult to say, but one thing is for sure, that her unmistakable Jamaican accent and her love to reggae are both genuine. She has a warm soul with a large heart and, like most sheep, she likes her grass freshly harvested.

The Swan
Originally from Russia, and used to be a prima ballerina, but once, while doing a pirouette in the swan lake, she broke her wing, and has now found herself at Paradise Valley, since she can't migrate south. She is an over emotional being, that reacts quite extremely to almost any given circumstance. When seeing the smallest drama, she cries or even faints, when hearing even the un-funniest joke, she laughs like a soprano. Her natural place on this earth is being the centre of attention, like all true diva´s.

Mink
Mink is a French fame fatal, a slick, fast spoken lady who takes no prisoners. She used to be a part of the French underground resistance, but was wounded in action and was forced to retire. She is still a fighter at heart.

Cat
Cat is a couch potato, both lazy and has little between his ears, as he repeats the same patterns and mistakes repeatedly. His slow mind also reﬂects in his physical behaviour, as he moves almost as slowly.