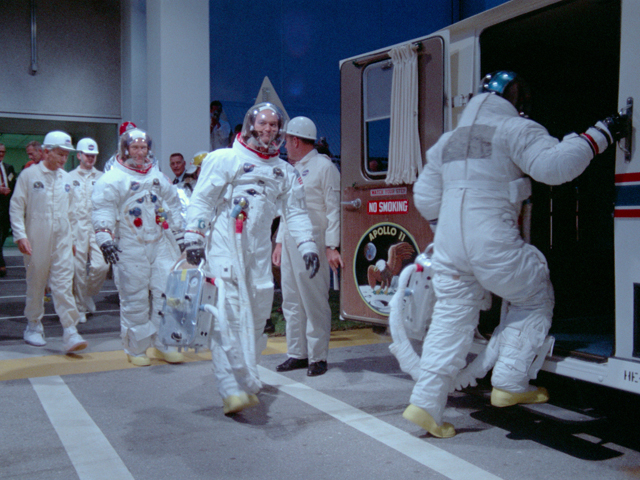 Synopsis: From director Todd Douglas Miller (Dinosaur 13) comes a cinematic event fifty years in the making. Crafted from a newly discovered trove of 65mm footage, and more than 11,000 hours of uncatalogued audio recordings, Ap ollo 11 takes us straight to the heart of NASA's most celebrated mission"the one that first put men on the moon, and forever made Neil Armstrong and Buzz Aldrin into household names. Immersed in the perspectives of the astronauts, the team in Mission Control, and the millions of spectators on the ground, we vividly experience those momentous days and hours in 1969 when humankind took a giant leap into the future.

Miller and team were working closely with NASA and the National Archives (NARA) to locate all existing Apollo 11 footage when NARA staff members made a startling discovery that changed the course of the project: an unprocessed collection of 65mm large format footage, never before seen by the public, containing stunning shots of the launch, the inside of Mission Control, and recovery and post-mission activities. The footage was so pristine and the find so significant that the project evolved beyond filmmaking into one of film curation and historic preservation.

The other unexpected find was a massive cache of audio recordings" more than 11,000 hours"made by two custom recorders which captured individual tracks from 60 key mission personnel throughout every moment of the mission. Apollo 11 film team members created code to restore the audio and make it searchable, then began the multi-year process of listening to and documenting the recordings, an effort that yielded remarkable new insights into key events of the mission as well as surprising moments of humor and camaraderie.

The digitization of the 65mm collection"as well as the re-scanning of 16mm and 35mm materials"was undertaken at Final Frame, a post-production house in New York City, which helped create a custom scanner, capable of high dynamic range scanning at resolutions up to 8K. The resulting tr ansfer" from which the film was cut"is the highest resolution, highest quality digital collection of Apollo 11 footage in existence.

Constructed entirely from archival materials and eschewing talking heads, Apollo 11 captures the enormity of the event by giving audiences of all ages the direct experience of being there. When John F. Kennedy pledged in 1962 to put Americans on the moon by the end of the decade, he described it as a bold act of faith and vision. Apollo 11 bears witness to the culmination of that pledge, when America and the world came together in an extraordinary act of unity and resolve, to achieve one of the greatest and most complex feats in human history.

The mission of Apollo 11 is one of the greatest achievements in human history – hundreds of thousands of people spread across tens of thousands of companies all focused on putting the first humans on another world.

At times it felt like our film had just as many moving parts. What started out as a simple editing exercise - could we tell the entire story of the mission using only archival materials – turned into a cooperative effort by an international team of experts to create the definitive work on Apollo 11 for the screen. The remarkable discovery of a cache of untouched large format film and audio recordings added another dimension to the project: it was more than just a film now, it was an opportunity to curate and preserve this priceless historical material.

This film only exists because of the tremendous efforts and sacrifices of an extremely talented group of individuals. From the archivists and researchers, to the post production teams and production partners, everyone labored for years to ensure we got it right.

We are also indebted to the scores of writers, filmmakers, and researchers that have come before us to build on the canon of project Apollo. And to the astronauts, their families, NASA employees, cont ractors, and volunteers, many of whom we came to know in the course of making this film, we humbly say thank you. You remind us that great things can be accomplished when people unite for a common goal.
-Todd Douglas Miller