LEGUIZAMO: BACK TO THE ICE AGE

John Leguizamo is both irreverent in his comedy and diverse as an actor. He is beloved by audiences as the Sid sloth in the Ice Age franchise, a character he reprises in Ice Age 3 Dawn of the Dinosaurs. The actor will soon return to his comedy roots with his one-man show which hits the road this Summer. He talked to Paul Fischer in this exclusive interview.

QUESTION: Was it always inevitable that you would return to this beloved character, and this franchise?

JOHN LEGUIZAMO: No. You know, we never know. I mean, we don't even know if Ice Age 4 goes July two. That - the day after it comes out. Although this time, they wrote a script ahead of time. But, you never know! They - you know, it's - Fox is strict that way. They don't jump the gun, 'til they know for sure.


QUESTION: So there's no contractual obligation.

JOHN LEGUIZAMO: None. Which is great, because I get to negotiate every single time.


QUESTION: When you signed on for this third one, what did you think it was about it that separated it from its predecessors?

JOHN LEGUIZAMO: Well, you know, this one - well, you've got a whole bunch of new characters coming in. And what was great about this was the parallel universe. This trapped, protected world that we discover by accident. I mean, I thought that was really ingenious, to really tie in what could have possibly - it was like a sci-fi element to Ice Age, that I really dug. And then - plus, I got to be like a single Mom. Which is pretty fascinating, to see this sloth now trying to raise T-Rex eggs.


QUESTION: Now you know the sloth so well by now. What are the challenges for you as an actor, doing the voice for this character, and trying to do things a little bit different, that audiences don't necessarily expect, vocally? Can you do that, or is it - what are the challenges?

JOHN LEGUIZAMO: Well, the challenges are always, how do you make that voice really feel like it's coming out of that animated character? And how do you make it really come to life? It's always - to feel like it's really alive, you know? And so basically what I learned in Two was that I had to really approach it like a movie, and really get it - you've got to get the emotional life of the character. And then when I'm in recording, I have to really - whatever physical paces that Sid is going through, I have to put myself through those paces. If he's choking, I choke myself. If he's running out of breath, I run for, like, ten minutes before we record. I got to really go through the paces, for that voice to really have that live quality. You know, that Mel Blanc Bugs Bunny that he did. He made those voices come so to life.


QUESTION: It sounds like you're a bit of a Method actor when it comes to that.


QUESTION: When you did the first one, all those years ago, did you expect that it would become what it was? And did you do it originally - do you do a film like that for the child within you, or do you do it for kids that you know?

JOHN LEGUIZAMO: I did it for me, for the child in me. I mean, I really - not even the child in me. For me. I really love animation. And - you know, I'm a big cartoon head, back in the day. I still have my collection of Timba the White Lion, and Marine Boy and Gigantor. I mean, I still have all that stuff. And all the Miyazaki - Spirited Away. I mean, I love animation. And, you know, I did voices before. I did Dr. Doolittle voices, Titan A.E.. I've always loved this genre. So, to me, it was such a thrill to be a part of it. You know, I just really dig it. And - and each time, it is a different challenge, to keep these voices alive and fresh. This time, there was a vulnerability that we were trying to create in the character, and keep the voice as vulnerable as possible.


QUESTION: What are the challenges for you as an actor, John? I mean, you've done all this wonderful stand-up comedy, you've played such an extraordinary variety of characters in films that range from studio movies to a lot of independent films. The older you get, are the challenges much greater for you, to find roles that really get your juices flowing?

JOHN LEGUIZAMO: Yeah. I think you're right. I think the older you get, you're not as idealistic about things. Also, I have a whole different - I'm at a different place in my creative life. Before, I used to really like to do things that were far - and different, and very challenging - very far away from me. And now, the older I get, I really want to do things that are much closer to me. That's very different thing that's happened to me. I mean, I want to do things that are even closer and closer to me. Which - sometimes actors go the opposite way, you know? They start very close, and they go far away. For me, it was the opposite.


QUESTION: Are you interested in doing more of that irreverent comedy that you've done before? Is that something that interests you?

JOHN LEGUIZAMO: Oh, yeah. You know, I start - my next one-man show I start touring in July. You know, and they want me to come to Australia with it, too.

JOHN LEGUIZAMO: Yeah. I've never toured outside of the United States, so I can't wait to really do it this time.


QUESTION: How different will the comedy be?


QUESTION: How do you explore your career comedically? How does that work?

JOHN LEGUIZAMO: That's what I'm trying to figure out. That's what I'm doing as a test here. It's basically - you know, I retell really important milestones that happened to me as I went along. You know, working with Swayze, Patrick Swayze. Working with Wesley Snipes. Working with Pacino and DeNiro. You know, like - what it meant to me, and how did it affect me as an artist? And -- you know, also, what was hilarious about all the situations, and the craziness about being cut out of movies, or movies that didn't work. And sometimes creative differences. I mean, there's a lot of humor that happens after the fact.

JOHN LEGUIZAMO: Well, I mean, I try to be honest about it. I mean, definitely, I've got to have a philosophical point of view of the whole entire show. But not about those - those segments, I kind of keep it pretty raw as to what I felt in the moment. Not years later, looking back.


QUESTION: Was it comedy, or was it drama that interested you when you were growing up?

JOHN LEGUIZAMO: It was comedy. I mean, comedy was the thing that really was my motivator. That's what made me want to act, was comedy. And then all of a sudden I fell in love with drama, and I felt like I had a knack for it. And that's when I got suckered into that.


QUESTION: Do you think that contemporary comedy is creative today? I mean, do you find the kinds of scripts that you read are lacking the sort of originality that you may have encountered when you were starting out?

JOHN LEGUIZAMO: Yeah. You know, there are some unique comedies, and some - I think comedies are more innovative, I guess, in the TV realm. It's really weird, things have changed. But I feel like TV is actually much more progressive in the comedy realm, and deeper, and trying different things. And movies have become - you know, a little bit - they're so commercial. You know, there's no more Annie Hall's out there. I mean, really deep, beautiful work like that. I'm hoping that that stuff will come back.


QUESTION: What about writing something in the movie world yourself? I mean, you obviously have a knack for writing. Are you interested in exploring the kinds of things that you do on stage? Would you consider doing those on film?


QUESTION: What is next for you, that you're particularly excited about? You've got a couple of things that you've finished.

JOHN LEGUIZAMO: Right. Gamer comes out in the fall, and so does The Ministers, this thriller.


QUESTION: And Gamers is like a science fiction film, isn't it?

JOHN LEGUIZAMO: Right, science fiction. And we're all in a video game, and we're controlled by these kids who play us. And Ministers is sort of a vigilante movie, with Harvey Keitel.


QUESTION: Are you still doing this Mexico 68 film?

JOHN LEGUIZAMO: No, that's still in development, so we haven't gotten to that yet.


QUESTION: And you start work on the comedy when? 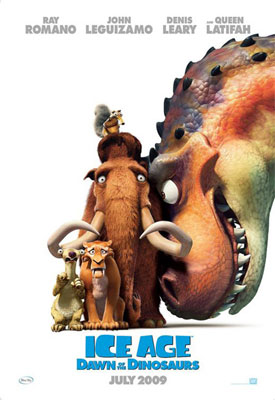 Scrat is still trying to nab the ever-elusive nut (while, maybe, finding true love); Manny and Ellie await the birth of their mini-mammoth, Sid the sloth gets into trouble when he creates his own makeshift family by hijacking some dinosaur eggs; and Diego the saber-toothed tiger wonders if he's growing too "soft" hanging with his pals.

On a mission to rescue the hapless Sid, the gang ventures into a mysterious underground world, where they have some close encounters with dinosaurs, battle flora and fauna run amuck -- and meet a relentless, one-eyed, dino-hunting weasel named Buck.