Michael Rapaport stars as a metermaid who thinks he has superpowers but this is not your average superhero movie. Michael Rapaport, who recently starred in the TV sitcom The War at Home, as well stints on My Name is Earl and Prison Break, completed this movie back in 2006 and is gratified it is finally seeing the light of day. He spoke to PAUL FISCHER in this exclusive interview.

QUESTION: So, what attracted you to this particular project?

MICHAEL RAPAPORT: You know, I read the script, and just really immediately fell in love with the script, and the character. And I was really taken by it. And then I just felt like I related to him on an emotional level. And then it was - I met with the directors, and jumped on board.


QUESTION: From what extent did you identify with this character on an emotional level?

MICHAEL RAPAPORT: I just related to the insecurity. And I related to the - you know, the loneliness and for that yearning for things to be better than they are. I also just related to the sort of end beat, which was that there are no - you know, life is life, and it just is what it is. And there's nothing grand, or over-the-top about it for most people. It's just - you know, you go about your day. You live your life. You try to make it the best it can be. And you go back to sleep, and you wake up, and you do it again the next day.


QUESTION: Is it hard to leave a character like this behind at the end of the day?

MICHAEL RAPAPORT: It was more challenging to stay in it, because it was so uncomfortable to be immersed in it. So - you know, once I really understood it, it was just a matter of, "All right." I just wanted to kind of wash myself of it. But I had such a fun time playing the part. And - you know, just had such a great time on the set, that I - it was just a real fun time. Challenging, but fun.


QUESTION: Do you still feel insecure, yourself, as an actor?


QUESTION: Michael, what are the challenges for you these days to try to find projects like this, and parts like this, that really get your juices flowing? I mean, are they hard to come by?

MICHAEL RAPAPORT: Yeah, they're definitely hard to come by. But you just have to be patient, and - you know, and sniff around. They do come to you.


QUESTION: How many years did you do the TV show? 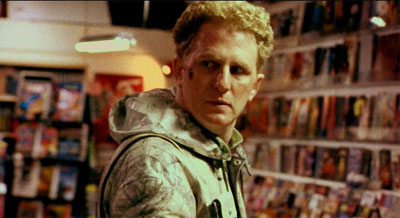 QUESTION: What was the learning experience for that? Did you learn about the politics of television?

MICHAEL RAPAPORT: Yeah. I learned about that - that there's a certain way that those shows are made, and it's a totally different skill. And I had a good time sort of wrapping my head around that.


QUESTION: Would you do it again?


QUESTION: Are you looking for a TV project again at the moment, or are you -

MICHAEL RAPAPORT: I mean, I look for both TV and film. It doesn't really make a difference to me.


QUESTION: Yeah. Do you remember the first time you decided that you wanted to be an actor?

MICHAEL RAPAPORT: The first time I decided I wanted to be an actor was when I first started doing it. You know, someone gave me something to audition for - I was already doing stand-up comedy at the time. And as soon as I did it, I was like, "This is what I'm going to do."


QUESTION: Why did you know that that was what you were going to do?

MICHAEL RAPAPORT: I was able to relate to the emotional pull that it takes to be an actor. And I was able to express myself in a way that that was - came very natural to me.


QUESTION: Do you have any other ambitions? I mean, would you like to - you're obviously a very creative guy. Would you like to do other things, besides - besides being in front of the camera?


QUESTION: Are you looking for something to do?


QUESTION: Do you know what else you're going to be doing next as an actor?

MICHAEL RAPAPORT: Well, I'm finishing up this season of Prison Break. And then, you know, I've got this movie, Special, coming out. And that's pretty much it right now.


QUESTION: How do you enjoy doing Prison Break?

MICHAEL RAPAPORT: It's fun. There's a lotta good guys, and it's a fun job.


QUESTION: I understand that they've extended the season, or something? Is that what I've been reading?

MICHAEL RAPAPORT: Yeah. I heard they're doing 24, instead of 22.


QUESTION: What does that mean to the show? I mean, are they going to do something special at the end of year?

MICHAEL RAPAPORT: You know, I don't know how it's going to play itself out, but I'm sure they're going to have something fun lined up.

MICHAEL RAPAPORT: If I got my place to where I felt like I had something really good to say, I would definitely do it. Because I think it's a lot of fun.


QUESTION: What do you think you would be able to comment about now, that you didn't comment on when you were younger?

MICHAEL RAPAPORT: As far as?


QUESTION: As far as comedy, as far as stand-up goes.

MICHAEL RAPAPORT: Oh. Well, I mean, there's so many things. You know, there's so much politics. I have kids now. I mean, those things alone - having kids, being a parent, is a whole bit into itself.


QUESTION: How many kids do you have?

MICHAEL RAPAPORT: I have two sons. Seven and eight.


QUESTION: Any sign of them following in their dad's footsteps?

MICHAEL RAPAPORT: We'll see. We'll see. I don't know. We'll see. I think that they might have the bug to do it at some point. But they got to do that when they're at the house.


QUESTION: So as a stand-up, as a comedian, George W. Bush was the perfect fodder for stand-up comedy.


QUESTION: But, you know, Barak Obama, that's going to be a bit more difficult, isn't it? How do you think the stand-up comedy circuit is going to change after Barak Obama takes over?

MICHAEL RAPAPORT: Well, I think there's a little bit of people that go after him for humor. I think that'll be funny. Like, everybody was kind of, like, you know, on his side. And then I think it'd be a humorful thing to, like, turn on Obama. And, you know, just kind of day-to-day, it's going to be based on what goes on in the world.

Les Franken (MICHAEL RAPAPORT) is a kind-hearted and soft-spoken man who loves reading comic books. He?s the type of guy who most people walk by on the street without even noticing in essence, he?s completely average and virtually invisible.

However, everything changes for Les the day he is accepted into an experimental drug study for a new and exciting anti-depressant, Specioprin Hydrochloride. As Les begins to take the drugs an unexpected side effect occurs - he begins to develop special powers: the ability to levitate, to read peoples? minds, and even walk through walls.

Faced with the dilemma of how best to utilize his new 'powers', the answer seems obvious to Les. He puts together a homemade superhero suit and hits the streets to fight crime and protect the world from the forces of evil.

Surveillance video soon exposes Les and his actions to the public via television news and therefore brings him to the attention of the businessmen developing the drug. Worried about the bad publicity Les is bringing to their new anti-depressant, they attempt to put an end to his superhero antics before too much damage is done. However, in typical comic book fashion, Les sees the men from the drug company as his evil arch nemeses - "The Suits"... men who want him to join them in their evil plan to use ?Special? to create an army of unstoppable assassins. Les refuses to play ball.