Question: What is it like being in an animated film?

Sir Ben Kingsley: The actor's world now is expanding at an extraordinary rate. The choices and the avenues and the outlets through which an actor can be seen and heard multiplies yearly and stretches yearly. It's very exciting for all of us to be able to diversify in such a thrilling way. The definition, almost, of an actor is somebody walking onto a stage and it's so different now... You walk into a sound booth. You wear a suit for motion capture. You delegate your body language to a whole team of animators who are the custodians for that side of your work. Very, very exciting.


Question: Tell us about your character, Snatcher, and how you approached him?

Sir Ben Kingsley:He is a man motivated by a lust for power. He's a man motivated by narcissism. He's a grandiose; He's a delusional, grandiose, narcissist – a wonderful character to play. He hungers for his place among the ruling elite and the ruling elite do not want him to have that place. So there is that constant struggle of ambition in him and that hopefully is reflected in the voice that I use.


Question: What was the biggest challenge?

Sir Ben Kingsley: I don't find my job challenging at all. It's such a joy. I make intuitive decisions and I use a technique to translate those decisions, but I very rarely find my job challenging in any way. I think that the exciting thing for the animators is to hear my voice and to bring it to physical life. Therefore, all I could offer them was a pure interpretation of that character vocally. I can't offer them any physical mannerisms. So I tried to be as still as possible when I was recording in the recording booth. In fact, I was lying down most of the time on a sofa that allowed my voice to be as relaxed as possible. There is something languid and languorous about Snatcher. He therefore, until he's very agitated and disturbed, he can't have a tense voice. So I had to be as relaxed as possible.


Question: What was it like for you to see the character fully animated for the first time?

Sir Ben Kingsley: I saw a little bit of my performance fairly early on in the recording process where they animated a sequence of Archibald's. And I could see immediately from what they showed me that it was the most surprising and perfect interpretation of what I was trying to do vocally. Seeing the whole film about two weeks ago, I was absolutely thrilled and delighted that I could play and take risks and leaps in my voice and that the animators really had a wonderful time bringing that to life. It's thrilling to see it. Thrilling.


Question: What are audiences in store for when they see it? 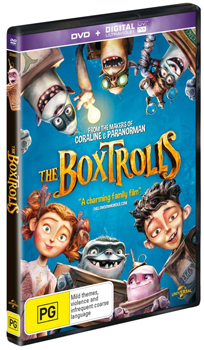 Beneath the charming cobblestone streets of Cheesebridge live the Boxtrolls; quirky, mischievous and cardboard box wearing creatures who crawl above ground at night to scavenge for bits of human junk. The Boxtrolls love nothing more than cheese and an orphaned baby boy named Eggs (Hempstead-Wright) whom they have warmly raised since his infancy as one of their dumpster-diving, junk collecting own.

Despite their timid, good-hearted nature, the Boxtrolls are feared by the people of Cheesebridge, who believe they will steal their children and beloved cheese. Eager to win over the town's affection, evil pest exterminator Archibald Snatcher (Kingsley) and his crew of Red Hat exterminators develop a plan to eradicate the kindhearted band of tinkerers. It's up to Eggs and his feisty new friend Winnie (Fanning) to bring the two worlds together amidst the winds of change - and cheese.

Blu-ray Special Features:
Featurettes
The Nature of Creation
Trolls Right Off The Tongue
Allergic To Easy
Let's Dance
On the Shoulders of Gaints

Dare To Be Square: Behind the Scenes of The Boxtrolls
Voicing The Boxtrolls
Inside The Box
The Big Cheese: Allergy Snatcher
Deconstructing the Dance
Think Big: The Mecha-Drill

The Boxtrolls is a comedic fable that unfolds in Cheesebridge, a posh Victorian-era town obsessed with wealth,...