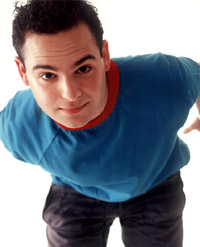 Melbourne radio personality, Corey Layton a.k.a. 'Captain Turntable', has always had a strong interest in the media. With an impressive list of previous radio work, he has enjoyed stints on various stations like Hitzfm, Fox fm, 3AW and currently resides at 101.1 TTFM where he presents 'The Captain Turntable Show' weeknights from 10pm-1am. Displaying a maturity and professionalism beyond his years, it is hard to believe that Corey is only 20 years of age.

This month, Girl.com.au had the pleasure of meeting with 'Captain Turntable'. In this exclusive interview, we reveal 'the man behind the voice', and get the goss on that Hanson incident!

Girl: How did you get started in the radio industry?

Corey: I started out at Melbourne youth community station Hitzfm when I was only thirteen. I was this little dude who would annoy the hell out of everyone! (laughs) That is where my interest in radio began, as it seemed like more of a fun gig than a job. It is always good if your work is something you enjoy doing and if you get paid it's a bonus. The fact that I did unpaid work at Hitzfm for six years highlights that I obviously enjoy working in this environment.

Girl: How did you get your break into commercial radio?

Corey: It was a combination of annoying a lot of program directors! (laughs) Moving into commercial radio from community radio hadn't been possible at all. Normally you had to start your radio career out in the country areas like Ballarat, for example. I thankfully skipped that process because at the time, TTFM were on the lookout for someone young that already had some sort of audience in the young market. I came along at a time when TTFM's Saturday night show was up for grabs and they trained me. Prior to that, I was working the graveyard shifts for six months unpaid. From the Saturday night gig, I moved into my current weeknight spot.

Girl: Now you are only 20 years of age, yet you have a prime spot on radio. Do you think this will be the future direction radio will adopt?

Corey: Well to be realistic, if you want to attract a young audience, you need to employ young people that can identify and are in touch with this audience. I go to university myself, so when students are up doing their homework during the show, which seems to be the kind of audience my show attracts, I can relate to them.

Girl: How did you earn the name 'Captain Turntable' in the first place?

Corey: What a name! (laughs) A guy called Rod, who originally came up with the name at a university radio station, gave it to me. He was doing a weekday show on Hitzfm at the time, and suggested that I do a five-minute guest spot. The proviso being that I call myself 'Captain Turntable' - which made me cringe at the time.

Girl: What is the best aspect about your job?

Corey: I guess one of the best aspects is, that you get to meet so many incredible people that otherwise you wouldn't have the chance to meet. I got to attend the Logies this year, where I had the pleasure of interviewing people like Elle Macpherson and Macy Gray. This is something I wouldn't have imagined a year ago.

Girl: Now, out of all the celebrities you have interviewed, who has been your favourite?

Corey: That's a tough one, but if I had to select someone it would be Deni Hines because she is really cool and more hyperactive than I am! (laughs)

Girl: Now we have to ask, what made Zac Hanson lunge at you recently?

Corey: Here's the story - I was escorting some TTFM listeners of a 'Meet Hanson Competition' to the Hard Rock Café. I was introduced to Hanson and before I could even open my mouth, Zac Hanson flipped and he started pushing me around and saying to me 'to play his song'. His bodyguard eventually told him to calm down but it was amazing how his parents and his brothers were standing around and watching all this like it was a normal, everyday occurrence. But it's a good story for radio!

Girl: That is a surprising story! Now we are also curious to know why you dislike Aqua's music so much?

Corey: Look, Aqua's music is not all that bad, S Club 7 is worse! It's just that whole cheesy sound and look that I don't like.

Girl: Now the Captain Turntable show predominantly plays more dance music, which isn't the usual music format at TTFM. Whose idea was it to introduce a different sound to TTFM's playlist?

Corey: Well the Captain Turntable show is going really well because we are offering our listeners an alternative sound to what is usually played of a nighttime. The majority of night shows stick to the same music format that can be heard during the day and not much else. I guess TTFM was on the lookout to offer something more to a night time radio show where sure there are prizes and competitions, but also general craziness and stupidity - which is what I love! And given my Hitzfm background, that was part of what they wanted to do, to capture that particular audience.

Girl: Do you keep in contact with the people from Hitzfm?

Corey: Definitely, I keep in contact with a lot of them and make the occasional visit to the station when they are on air. I will always be loyal to Hitzfm because I was there for a long period of time and that is where my basic radio training began. I have got so much to be grateful for places like that and TTFM have realised that community radio is just as good a training ground as country radio.

Girl: Now you are currently completing a media course at Deakin University in Melbourne. How are you finding juggling your radio career with your tertiary studies?

Corey: At times, it can be really hectic and tough to organise things. I still have to complete essays as well as host my radio show. I also have to spend time with my girlfriend and socialise with my other friends. There are times when it does get too much to handle but TTFM are conscious of this fact and have been great support.

Girl: What do you like to do in your spare time?

Corey: Well when there is spare time, I like to hang out with mates and go to clubs and places like that. All the usual stuff I guess.

Girl: What advice can you offer to budding, young radio stars?

Corey: Community radio is definitely the way to go, as it is such a good training ground. Just get in there and go for it!

Girl: What message do you have for your fans out there?

Girl: Do you have aspirations to work in other sections of the media?

Corey: Yes I definitely want to explore other aspects of the media. Radio is not something I want to do forever.

Girl: Where do you see yourself in five years time?

Corey: I've got no idea! (laughs) If you would have asked me this question a year ago where I would see myself now, I wouldn't have said hosting a weekday show on TTFM.

Also read about the real man behind "the" voice in MY BOY, where we grilled "The Captain" on stuff that really matters!!!