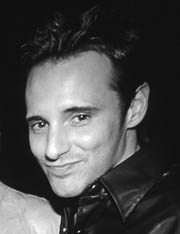 Fave Food: Italian
Fave Film: The Godfather
Fave Band(s): The Rolling Stones, Kiss
Describe yourself in 3 words: Musical, messy and easy-going.
Best Feature: I'm very humanistic, compassionate and tolerant.
Worst Feature: I'm full of bullsh__ too!
Person you would most like to meet: Nelson Mandela
Hobbies/Interests: Going out, shopping and watching movies.
First Job: Played in my first band when I was sixteen.
A talent you wish you had: Some people would say singing!
The best advice given to you: Always be 100 per cent prepared and organised and take everything seriously. And just when you think you've got things nailed, you can always improve on that 10 or 20 per cent.
If you were told you had a minute to live, what would you do? I'd set the record straight with a few people around me (not that they can do anything about it!)

Melbourne-based band Invertigo is the latest pop/rock band to emerge on the rapidly growing Australian music scene. Lead Vocalist Christian Argenti and brothers Jerry (guitar), Vince (drums) and James Leigh (bass/keyboards) are riding high on the success of their impressive debut single 'Desensitized'. With a deal already secured in the U.S. with prestigious Atlantic Records and an album due for release early next year, Invertigo are set to be propelled to International stardom.

In this exclusive interview, GIRL chatted with vocalist Christian about Invertigo's future plans and those high notes!

GIRL: Firstly, how would you define Invertigo's sound?

Christian: Obviously the single, which everyone has heard and the album, are going to be two very different things as far as judging what category it sits in. But I would say that it's pretty accessible pop whether it's the chorus melodies or the strong hooks as 'Desensitized' highlights. Our songs are something that anyone can get into, it doesn't really have a certain demographic that we're aiming it to. The rest of the album gets a little more moodier and aggressive as the album goes on and there are a few tougher, darker moments. But we'd really prefer to leave categorizing our sound up to people who listen to it.

GIRL: The band name Invertigo is pretty unusual. Does it hold a particular meaning?

Christian: To be honest with you, it means absolutely nothing! (laughs) 'Invertigo' is really a word that was a bit of a spin on the whole 'vertigo' thing. When we signed a deal in America recently, the vertigo name was already taken so we just basically tweaked that name a bit. We're not the kind of band that really worries too much about what the band name is going to be. We had to have a name, so we just went with that.

GIRL: Has your life changed much since joining Invertigo?

Christian: Yeah it has but not necessarily in the way that people would expect though. The demands on your time and so forth, is really out of your hands, as far as what your day is going to be like, and what the weekend's looking like. And luckily because the song has done really well and because we're surrounded by very good people, all the time spent is doing really worthwhile things and meeting good people. However, sometimes you look at the week and you see that from Monday to the following Friday, there's literally 16 hours worth of stuff flying all over the place, which can be absolutely daunting! So in that sense, it's definitely been a major change in my life.

GIRL: When did your interest in music begin?

Christian: It began from a very early age. Like the rest of the band, I came from a very musical family. With three older sisters, a brother and a father who were all extremely musical, there were always the living room concerts and shows after dinner. We'd whack something together just after dinner and come out and perform this wonderfully professional half an hour little set in front of the auntie's and uncles. From that point of view, it was something that was always taken fairly seriously and everyone had very different musical influences so in that sense it was always kept fairly open. That is why I think as a band, not only myself, but the other three members were always very open minded to all sorts of musical ideas and influences.

GIRL: What has been your best gig to date? What has stood out in your mind?

Christian: I remember when I was seventeen, one of the first gigs I ever did was a 'Battle of the Bands'. I think we were one of the worst bands of the night, but it was just having that amount of people there in the audience! It was my second gig ever, in front of that kind of crowd who I think wanted blood that night (laughs). The fact that we came off stage and kind of won them over, I think made me realise that this is what I want to do more of for the rest of my life.

GIRL: I believe you guys were recording recently. Were you working on your album?

Christian: We've actually just put the very final touches to the album. So we're really excited about bringing this particular album out because as I mentioned before, 'Desensitized' has been received very warmly, but the rest of the album I think has got a lot more exciting things to it.

GIRL: When can we expect the release of your album?

Christian: We're hoping to release the album in the New Year.

GIRL: What is the most enjoyable aspect about being involved with Invertigo?

Christian: I think the most enjoyable aspect is the fact that by and large when you're in a band and you're expected to perform at this particular level, the people that you get to work with and meet are always on a pretty high level and very professional. So in that sense, it's been a pleasure to meet so many really wonderful, competent and professional people I suppose.

GIRL: And what is a downside of the industry?

Christian: I suppose from what I've seen of people working in bands alongside me, is that when you're hot and when you're product is hot, everyone wants to do things for you. Two weeks later though, one or two things happen and you find that you're not so hot anymore, it's those same people that turn their backs on you. It takes a while to know exactly who are friends with you for you or are there because you're doing very well at the moment. So there is definitely a few trust issues but luckily at this point of my existence in the industry, I haven't come across too much of that yet. Another downside is that it is very difficult to maintain a girlfriend due to the work demands on your time. 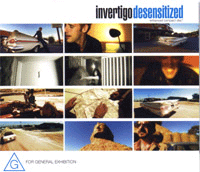 GIRL: What inspired the song 'Desensitized'?

Christian: Vince (the drummer) and myself were speaking about situations that we had recently come out of as far as relationships go. Both of us commented how the girls in our lives at the time, had trust issues with us and were a little standoffish. We agreed that it was a good theme for a song so we sat down with a few ideas and he'd already had a rough demo of it done which I really loved. So we looked at a few words and desensitized was a word that Vince kind of spat out and we thought it was a cool word. It took a while for a few people to get their tongues around it, but that's basically where desensitized came.

GIRL: Now you hit some pretty high notes in that song! Do you have to psyche yourself up to sing those notes or is that just a natural part of your range?

Christian: It's funny because it comes fairly naturally, I mean there are times when you go on TV or you've got to sing those notes at 8am, then sometimes it becomes a bit of a challenge (laughs). As a kid I used to walk around thinking I was pretty cool trying to mimic some of the Motown singers that used to get those really high notes. When we were finalising the chorus for 'Desensitized', we included the notes as more of a surprise element rather than your predictable old chorus. It is fairly natural and it's really not that difficult. Maybe you can have a go at it and see whether it comes just as easily to you...? (laughs)

GIRL: What was it like working with Charles Fisher who of course has worked with the likes of Savage Garden and the Hoodoo Gurus?

Christian: Charles is a man who has always got an idea as to how to try to pull something off. There were a few times where we felt, maybe what we've got in our head isn't achievable because we tried this and tried that and it didn't work out. Charles always had one more idea - at the end of the day, he always seemed to get what we had in our heads, down on paper. Which I think is the sign of someone who is very innovative. As a relationship, working with him was always very harmonious and very effective.

GIRL: Now what is on the cards for Invertigo in the coming months?

Christian: Well 'Desensitized' keeps rolling along, which is great for us because we have a good feeling about that song and it's been a great way to debut. So we're looking to get out there to as many states and cities around Australia, to promote that song and do a few gigs within the next few weeks. Then sometime in October we'll be looking at releasing our second single. We also recently signed a deal with Atlantic records in the States, which is fantastic, so we're looking to get over to the States hopefully in the early part of next year to do a little promo. I think they'll be releasing the whole album over there at the same time. So that is really exciting for us because of the fact that the band is so young and we got that deal before we even released 'Desensitized' here. We've been extremely lucky that we've had such immense interest from overseas especially in the States, so in that sense, there's a lot of exciting stuff coming up.