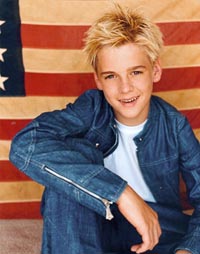 HE wants 'candy' and every girl in town wants a piece of HIM! AARON CARTER is the latest heartthrob to emerge on the ever-growing pop scene. At only twelve years of age, this groovster already has established himself as a major international recording star. Aaron holds the record for being the youngest singer to have four consecutive Top Ten singles in England. Recently in Australia on a whirlwind promo tour to spread the word on his latest album Aaron's Party (Come Get It), Aaron managed to stop by the GIRL offices where he candidly spoke with us about his love for Britney, his brother Nick and those never ending parties!!