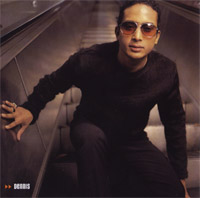 Fave Food: Seafood
Fave Film: One Flew Over the Cuckoos Nest
Fave Band: Lucy Pearl
Describe yourself in 3 words: Obnoxious, repulsive and arrogant!
Best Feature: My ability to clear the room.
Worst Feature: My ability to clear the room!
Person you would most like to meet: Prince
Hobbies/Interests: Fishing
First Job: Styling
A talent you wish you had: To play the harmonica!
The best advice given to you: You're never going to make it!
If you were told you had a minute to live, what would you do? I'd call my mum. 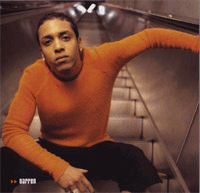 Fave Food: Mauritius cuisine
Fave Film: History of the World
Fave Band: Pretty Violet Stain
Describe yourself in 3 words: Wacky, funny and ??
Best Feature: My nails
Worst Feature: Dennis!
Person you would most like to meet: Stevie Wonder
Hobbies/Interests: Songwriting
First Job: At a glass factory.
A talent you wish you had: To sing and dance!
The best advice given to you: Don't touch that!
If you were told you had a minute to live, what would you do? Give me five!


This month GIRL gets up-close and personal with Australian R&B group - KAYLAN. GIRL was so impressed by the guys the last time we chatted; we just had to invite them back! Dennis and Darren have been quite busy in recent months touring with International stars Destiny's Child and the Vengaboys. Combine that with the release of their second funky single "Shake It" and their debut album "No Commandments", it is a wonder these guys have any spare time to party!

GIRL: Your debut album is titled "No Commandments". How long did it take you to record this particular album? 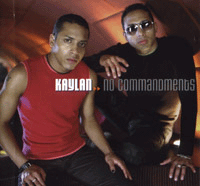 Dennis: It took us about three years in total.

Darren: When we started writing the album, Warner wanted to give us time, rather than push us to get the album out. So in that sense, they really gave us time to develop our writing. We basically spent a year and a half writing the album, and then a year and a half recording it. And with the recording side of things, as it was our first time in that environment, we had to find our sound and be comfortable with that.

Dennis: We weren't trying to make an album that sounded like another act, we were trying to create our own sound and vibe. So when you're doing that sort of thing, I guess it takes a while.

GIRL: The song "No Commandments" is a favourite of mine. Where did the inspiration to write this song come from?

Darren: Well when we first moved to Sydney, we weren't living by any! (laughs) When we moved interstate from Melbourne we were struggling for so long that we felt it would appropriate to call the album and single "No Commandments". So definitely the situation we were living in at the time, inspired us to write "No Commandments".

GIRL: Your debut single "Rock Me All Night" has been a very successful track. It continues to be a massive club hit, and was recently certified Gold. Are you surprised with how well it's done?

Darren: No not really (laughs) I think we did really well considering we're a new band, it's hard for people to accept new bands, and especially a track that we've written ourselves.

GIRL: Now the last time we spoke to you guys, you had just released your first single. Since then, it seems that things have just skyrocketed for you, haven't they?

GIRL: What was it like touring with the Vengaboys?

Dennis: To be honest with you, we really didn't like that tour. We didn't watch their show, as we're not into that kind of music. We just did our performance and then left. And besides there was no Vengabus! (laughs)

GIRL: Now you also recently toured with the likes of Destiny's Child. Did you get to hang out with the girls?

Dennis: Yeah the girls are cool and we travelled with them on the plane, but we really didn't get to hang out with them much as they were really busy and so were we at that particular time doing promo.

GIRL: Your next main gig was with Bardot. How did this tour come about?

Dennis: We wrote two of their songs so I think they perhaps felt that they owed us a favour or something? (laughs) 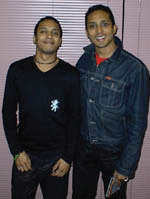 GIRL: Are you good friends with the girls?

GIRL: Do you enjoy being on the road and performing?

Darren: When we're on the road, I like being away just for the fact of being away as we're always stuck in recording studios when we're not performing. So being out and performing on the road is sort of like our holiday.

GIRL: Do you have any plans to release your music overseas at this stage?

Dennis: Yeah we want to release our music in America. We aim to be living there next year. This whole album is leading up to us going over there. We're waiting until we're very successful with the album in Australia, and then we plan to take it overseas.

GIRL: Now you have small parts in the upcoming Baz Lurhmann film Moulin Rouge. How did all this come about?

Darren: We've known Baz for a while, actually ever since the opening of the Fox Studios in Sydney. We heard that the movie was going to be filmed and they had auditions and they actually called us up and asked if we would be involved. Baz had roles written for us - basically we play brothers who can sing and dance.

GIRL: Now I'm curious to know, where did the band name KAYLAN stem from?

Darren: Kaylan is actually the name of our four-year-old nephew, so we named the band after him.

GIRL: Have you guys had any funny or bizarre encounters with any of your fans? 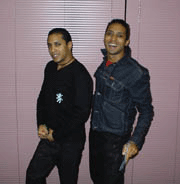 Darren: Yeah there are these fans that follow us everywhere we go from Melbourne to Perth and in other parts of Australia as well. It's quite weird actually.

GIRL: What's the funniest rumour you've heard about yourself?

Dennis: I heard that someone rang up a radio station in Melbourne and said that I was seeing Sally from Bardot.

Darren: There's a rumour that I'm gay because I wear nail polish. I mean if you were in a rock band then it's okay, but because I'm in an R&B band, you don't do that! (jokes)