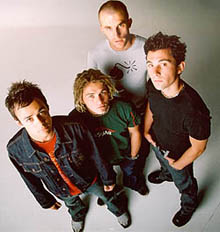 He's a lover, he's winner he's a Renegade fighter! He may be a man of few words, but he speaks them well. We got to catch up with the charming Andy Lynch from New Zealand band, ZED.

Read on to learn about Andy's thoughts on the band, leaving his Brazilian gal and what this talented young group get up too while producing their album "Silencer". We got the inside scoop on their touring tactics and found out whether Andy prefers Boxers or Jocks! (All the really important stuff!)

AND you also have the chance to win a copy of Zed's Album!

Andy Lynch - ZED
Full name: Andrew Russell Lynch
Nickname: Randy, Little Lion
Star sign: Capricorn
Fave Food: Indian
Fave Film: Star Wars
Fave Artist: Stone Temple Pilots
Describe yourself in 2 words: Mellow Yellow
Best Feature: Loyal
Worst Feature: I am moody
Your Ideal Woman: Funny, when they try and take the piss out of me - intellectual challenge.
Do you prefer boxers or jocks? Jocks
Hobbies/Interests: Flying
First Job: Paper run age 11
A talent you wish you had: I wish I could do a martial art really well
The best advice given to you: Love long trust few and paddle your own canoe.
What cartoon character best describes you? Speedy Gonzales
If you had a minute to live, what would you do? Sit down and look around, take in the sites and think "s_ _t what a blast!"

G: Where did the name ZED come from, did the other guys explain it to you?

Andy: It came out of the blue, it's one of those snappy sounds that just sits well and after a while you don't even think about it.

G: Now all the other guys Nathan, Ben and Adrian all went to school together yet you came into the band 5 years down the track, how did you find this transition?

Andy: Well it was actually really easy, it was just like clockwork - At first I thought it would be hard, I thought they might be worried that I'd change the sound, but I fitted in; it was really easy. They already had fans and stuff - So it was easy, hey.

G: Did it bother you leaving the chase of the Brazilian girlfriend?

Andy: Umm, oh yes of course, but I had better things to do. 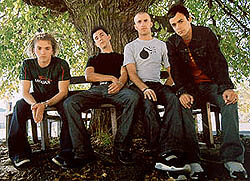 G: What has been the reaction from your friends to your new growing stardom? Have your friends changed towards you?

Andy: Oh not at all, they take the piss out of me like they always have.

G: So has it always been a dream of yours to be a performer and musician?

Andy: Yep - from a very young age. Both of my parents were performers, I grew up around it so I don't really know anything else.

G: Now you worked with David Nicholas on SILENCER - he has worked with the likes of Sting, INXS and Bryan Adams - how did you find this whole experience?

Andy: Oh it was great. It was like having five wheels on a car. He helped us focus our intentions and our sounds and tidied a few things up and now he's a great friend too. He's great.

G: How are you finding touring with COLDPLAY?

Andy: Oh awesome - the COLDPLAY boys are great. On our first show you have a sign on your dressing room, and they took the sign off and it was on the floor and they had written on it "To ZED, welcome to the tour, don't take any Sh_ _ Love Coldplay" And there were two big bottles of expensive champagne.

G: Wow - how nice, did this make you feel special?

G: What was your first professional gig?

Andy: I was 15 and I was playing with a Jazz band at a little club in Auckland and I was scared out of my wits! I hid behind my hair and played on.

G: Do you prefer performing or recording?

Andy: I couldn't choose because they are both very different. I love them both. Recording studio is great cos things are always changing, you're being creative and it always really rewarding hearing things back for the first time and it's really really loud. Playing is different because you're getting a reaction from people, your interacting with a whole lot of people and you're just watching them enjoy the music. They're both so different and I love them both 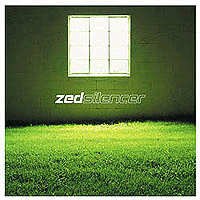 G: What can the audience expect at a ZED performance?

Andy: Good songs and it will be loud - it's got to be loud. Our concerts rock a lot more than our CD - so they're in for a surprise.
If the crowd gives us enough intensity and encouragement, we do some really silly things. You respond to what you get.

G: How did you feel when you won the ALBUM of THE YEAR and Top Group?

Andy: Well amazing - it was great to get some recognition from the industry.

G: Why the title "Silencer" for your album?

G: What have you found to be the most challenging thing about the music industry to date?

Andy: I think being in the public eye a lot. Back home (New Zealand) a lot of people recognise us and follow us around so it's hard to get some private time sometimes you know?

G: Who are your musical influences?

G: Andy, What has been the most memorable part of your life with the band so far?

Andy: The day our CD was released - we had a big bash in this funky bar and we played live for TV, lots of people were there and it was great. We were all kind of sitting there saying, "Wow, I can't believe we've done this".
You lose site of the facts because you're caught up in the process of getting there and then when you take a step back you can see what you have actually done.

G: Is there a practical joker in the group? Who is it?

Andy: Not yet, I think there are inklings of it. The more you tour the more bored you get on occasion at the odd hotel so I can see some nasty pranks coming on really soon. It will probably involve me and Adrian.

G: Do you have an official website that fans can check out?

Andy: Yep, we sure do! www.zedquarters.com

G: Where do you see yourself and the band in the future?

Andy: Hopefully in more territories, we have about 17 countries who have said they'll give us a go, so we'll just get on to doing that. That is the next step for us and then Europe and America and Asia and so on and so forth. We really want to get out there and show the world what we're about.