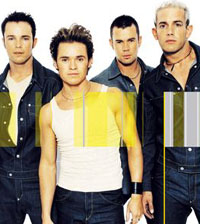 Q: Hi guys, I understand Michael's not feeling too well...

Andrew: He's suffering from a little sore throat so he's up in the hotel room resting for the show tonight.

Q: Can I begin by asking which bands you were into when you were forming the group?

Toby: That was about the end of '89. I was an Aussie rock fan actually. Lots of Hoodoo Gurus, Screaming Jets and Inxs. I even owned a Rat Cat album. A bit tragic really!

Phil: I was into Queen and Billy Joel...And I still am.

Andrew: I guess I was into whatever was cool at the time. I thought Dire Straits were cool (laughs). I was into Queen as well and later on I got into Michael Jackson and Prince but there were no bands like us at the time.

Q: So, you didn't have any direct inspiration?

Toby: Well, we all had a love of music that's been there since we were tiny. We all grew up playing piano and singing but I guess people like Michael Jackson and George Michael. Those kinds of artists were an influence but we actually got together as a group to do one concert. It was an end of year show that our school was in so we thought we'd perform once and that would be it. Have a bit of fun and move on, but we kept getting asked to perform at school functions. I think we had to sing the national anthem about 1000 times when we were at school. It just kept growing from there and so we left school and thought - lets keep it together and try to get a few jobs and stuff.

Andrew: I think by the time we were about to become a recording act it was Boyz II Men. They were doing 'Do Wop' and that old school acappella but in a 90's way. I guess we all loved them and saw their show and thought well, if they can do it then so can we!

Q: Do you remember the first song you did?

Phil: Yeah, it was 'Earth Angel' which is the song we just did in 'Happy Days' the musical.

Q: Do you remember how you felt when you came off stage?

Andrew: We probably thought it wasn't that great and that we could have done better. You know we were a little nervous and a bit stiff but it was fun making music from just our four voices!

Q: What did you want to be when you grew up?

Andrew: I had no thought of what I'd be. When I left school I did physiotherapy because I didn't think I could make a living from music.

Toby: I thought I'd be a pastry chef but I found out that they have to wake up at some ungodly hour and thought 'that's not for me'.

Phil: My dad was in the police force so I thought I'd do what he did and then I realised how much he hated it so I forgot about that.

Toby: An R.S.L. Singer!!! No I think we all want to keep going with the group forever and ever!!!

Q: Did you all study music at school?

Toby: We all took singing lessons, piano lessons and had classical training. Three of us were in the school band, Phil and Andrew played trombone and I played trumpet.

Andrew: And in the dance group!!! We were the coolest guys!!! (laughs)

Phil: We were so hated! 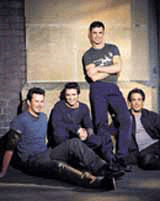 Q: Did you get bashed?

Toby: Yeah a little bit of that. You know, we had fruit thrown at us. It was one of those schools where if you didn't play rugby they thought something was wrong with you.

Phil: No, the girls looked a bit like boys though!!! It was an agricultural school. So lots of farmers and farm chicks. We weren't popular because we were musical rather than sporting - we were into art and stuff!!!

Q: Who is your favourite singer?

Phil: Freddy Mercury. When you saw him on stage, you saw how he held the attention of the audience for two hours. He had such a presence on stage. I'd love to get to that point where we can do that. It's an amazing gift to have.

Toby: Michael Jackson. Especially in his earlier years. He's an amazing showman and dancer. 'Billy Jean' and 'I Want to Rock With You' is awesome music.

Q: Whose music would you buy at the moment?

Andrew: Yeah, I like Macy but an album I would buy if they would release one is Crowded House or one by Neil Finn.

Q: Do you go and see films?

Andrew: I'm just about to watch 'End of Days'. It's playing in the hotel.

Toby: I just saw 'Scream 3', I had to! It's so trashy but I couldn't help myself. It's probably funnier than the other two.

Andrew: I like films that make you think, like Sixth Sense, I was wowed with that ending!

Phil: Bring on the seafood!

Toby: I've been getting into the sushi lately. I've just discovered the sushi bar near my place.

Q: What shoes have you got on?

Andrew: I've got the same shoes on as Toby!

Toby: These are Alberto Guardini.

Q: How do you write your songs?

Andrew: We don't actually do any writing as a group. We sit down and say 'ok lets write a song together'. Mike and I do a lot together, Phil's written with other people for songs on this album and Toby also. It usually starts with an idea and usually a musical idea. The melody comes first and then the lyric unless we get some really great hook lyric, I think 'Counting Down' on this album was one of those songs. Once it's finished we then sit down as a group and figure out who does what with it.

Q: Is it fair to say Michael is the front man?

Andrew: Well, I think his lead voice is really strong and when we record a song we'll generally try out the lead part and it just so happens that Mikes voice suits the lead part most often but when we perform its definitely as a unit.

Q: Do you prefer recording or performing?

Andrew: This tour has been a lot of fun but it's also cool when you've been recording and you get the songs back and hear them for the first time and you're really happy with how it sounds.

Q: Does it get tense in the studio?

Andrew: I guess it does get quite tense. It depends. You know one producer we might think is too obsessed with detail. Others may let stuff go that we think could have been better, but you just try to get a bit of balance.

Q: What's the best thing about being a popstar?

Phil: Just the fact that most people do this for a hobby to get away from their job so it's just great to be doing something that we absolutely love.... And getting paid!

Q: Is it weird being recognised?

Phil: It was at first. It was like wow, they know who I am! Now we're used to it but it's never been a problem.

Q: So do you expect it now?

Phil: Well yeah. If I walked the whole length of Chapel Street and no one looked at me I'd think it was weird!

Toby: It was funny the other day I was in Grace Bros in Sydney and an Asian girl turned around and saw me and went nuts! She was on holidays here and was from one of the Asian countries we had visited and she pulled out a photo of me from her wallet and was beside herself! It was cool.

Q: So, no solo aspirations?

Phil: Not yet. Sure, maybe one day someone will want to do something different but I think the group will always be the main thing.

Toby: I whistle really well and the guys are cool with me doing a whistling album (laughs).