Synopsis: In Zookeeper, the animals at the Franklin Park Zoo love their kindhearted caretaker, Griffin Keyes (Kevin James). Finding himself more comfortable with a lion than a lady, Griffin decides the only way to get a girl in his life is to leave the zoo and find a more glamorous job. The animals, in a panic, decide to break their time-honored code of silence and reveal their biggest secret: they can talk! To keep Griffin from leaving, they decide to teach him the rules of courtship - animal style. The film also stars Rosario Dawson and Leslie Bibb and features the voices of Cher, Nick Nolte, Adam Sandler, and Sylvester Stallone.

Can We Talk
"To make a movie where we have talking animals blended with live actors is a pretty complicated process," explains producer Todd Garner. "It starts with the voice talent - almost like an animated movie. You get their performances, their nuances, their characteristics. When you have that, you can shoot the live action animals, trying to match their performances as closely as you can to those voice performances. Obviously animals are unpredictable, so we found a lot of moments where animals did things that were spontaneous and wonderful, and we were able to manipulate the scene around those spontaneous performances. After that, we brought in Kevin James to act with the animals. Because we had already seen what the animals had done, Kevin James was able to manipulate his performance to have more flow and feel more organic. Finally, we put everything together, adding the visual effects and blending it all together through the editing process so that it feels like one cohesive story."

Summing it up, Frank Coraci says the process of making Zookeeper involved "a lot of planning, a lot of people, a lot of hard work, a lot of patience, and a lot of not getting eaten by lions."

The job of making the animals talk fell under the purview of Sony Pictures Imageworks visual effects supervisor Peter G. Travers. Peter G. Travers was one of the first people brought on to the film, and since VFX work continues all through post-production, he was one of the last to complete his work. "Every time an animal was going to say a line, we were there, trying to figure out how that was going to be done," he says of his time on set.

"You have to make it look photo realistic," says Peter G. Travers, but that's easier said than done. "Human beings are, of course, very accustomed to seeing people talk. They're also accustomed to seeing animals. So, if you try to make an animal talk, it's fantastical and hard for us to grasp. How do you make that look real?"

But Peter G. Travers says his team went further: "For every frame of photography, we had to make the animal look like it was smiling or talking or blinking or whatever it was supposed to be doing." Indeed, the main complication in anthropomorphizing the animals was in matching the voice performance of the actor with the on-camera performance by the animal. For example, he says, "Part of how we react to comedy is not just in pure dialogue; it's in gestures and body movement. There are a lot of moments where Kevin James is very funny and he doesn't have any dialogue at all, it's just expression. We had to match that - and that meant we had to merge the actor and the animal and make it look like the animal is delivering the comic performance." 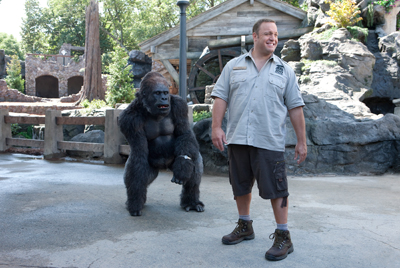 Peter G. Travers also videotaped the voice actors during their recording sessions - in this way, the animators would have reference material that they could draw on and be inspired by as they created the animals' animated expressions.

Peter G. Travers and Frank Coraci also set a high bar for themselves, compared with the ways other filmmakers showed animals talking. "If you really pay attention to those films, you can see that there are a lot of quick cuts," he says. Generally, he explains this is because all of the animals have to be shot separately, and because it can be challenging to get the proper performance from the animal.

To separate Zookeeper from the pack, it was important to Frank Coraci and Peter G. Travers to move the camera. Using motion-controlled cameras, the filmmakers would shoot the animals' dialogue scenes one animal at a time until they had footage of each animal doing what the scene required. While it can be frustrating trying to get a shot in which an elephant hits its mark, Frank Coraci says it was all worth it. "I was so excited to do an animal movie with big animals like no one else has ever done before. It made doing the hard stuff worth it," he says. "It really makes it feel more natural, like the animals are interacting with the human world."

Peter G. Travers and his team were also responsible for creating the film's climax. "Obviously, we couldn't have Kevin James on Bernie's back climbing the Zakim Bridge in Boston and landing on a car," he says. The scene was achieved on a blue screen.

The first step was to plan out the shot using "pre-visualization," or "pre-vis." "It's like the next generation of storyboards - it helps you determine camera information and the placement of your actors. You have to break down exactly what you need - the geometry of it - before you shoot it," he explains. "We got the actual plans for the Zakim Bridge, and we used those to build a replica in the computer. After we had planned out the shot exactly how we wanted it, we built blue screen versions of those sections of the bridge and modified them so that we could give the illusion that the gorilla was climbing it. It takes a lot to make it look real."