There is no doubt that Swiss director Marc Forster is nothing if not diverse. His credits range from the challenging likes of Monster's Ball, to the sweet Finding Neverland, the commercial thriller Stay and the poignant Kite Runner. His latest film takes him to his largest cinematic canvas to date, directing the latest 007 thriller, Quantum of Solace, a direct and dark sequel to Casino Royale. Takinfg the film and the franchise in a new direction, Forster was more than happy just having one 007 film to his credit. He talked to Paul Fischer in this exclusive interview.

QUESTION: If you look at your body of work, it doesn't necessarily suggest that there is a Bond action filmmaker in you. Finding Neverland-hardly much action in that movie. And Monster's Ball-not so much. What did they see in you that made them think that you would be the right choice for this?

MARC FORSTER: You know, I've wondered at the same question. When I met them the first time, I said, "I don't understand why you want me to do this," because they literally - you know, I don't have an action background. And they felt that they wanted to reinvent Bond last time, with Daniel Craig, when they started that movie. And they wanted to go another step further. They didn't want an action director, and wanted a storyteller, so to speak. And I thought at the beginning that I wasn't interested in doing it.


QUESTION: What changed your mind?

MARC FORSTER: Daniel Craig changed my mind. When I met him, I thought he's a really interesting actor. I always loved action movies. And I thought, you know, "Why not?" It's Bond. It's not a typical action film, so to speak. It's controlled by Barbara Broccoli and Michael Wilson, so, these are the two people I really have to - I'm dealing with. And I think he just sort of humanized that character, and I thought there was an emotional depth to him which would be really interesting to be working with.

MARC FORSTER: I mean, I imagine it - you know, like, sort of that in a sense, you're working within that framework of Bond. And then I thought, to imagine myself - I'm a filmmaker working under political censorship. And within that political censorship, you still have to get your artistic vision through in a very clear way. In a subversive way, sometimes, too. And I thought it would be a really interesting experiment. But at the same time I must say, they gave me the freedom, the producers, to cinematically make the movie I wanted to make. And I felt like, what is - and for me, I was imagining, "What is the Bond film I truly always wanted to see?" Me personally. And I always loved those early '60s Bond movies, and wanted to, in some of the designs, do a throwback to that. And some homages to those movies. 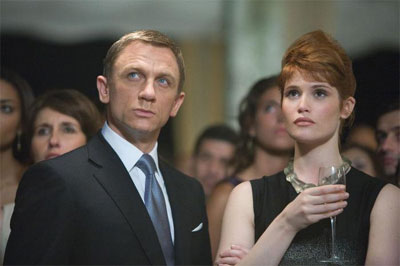 MARC FORSTER: Yeah. And there are a couple of other ones in there. And then I always sort of - I loved sort of Hitchcock's influence on Bond, which I wanted to do - like in the early Bond films.


QUESTION: Let me ask you, then, about the Tosca sequence.


QUESTION: Because that, I thought, was the most visually arresting moment for me in the film. And it reminded me of two things. In one, you have Coppola's Godfather movies, the way he did that balancing kind of tranquility and art with violence. And Hitchcock's Man Who Knew Too Much.


QUESTION: How much influence was there in crafting that particular sequence?

MARC FORSTER: Originally, the script was set sort of in a UN setting, where Bond spies on them and listens to them. And I thought that was rather boring. And when I found that location, I thought Tosca as a parallel to our story, and I thought it would be beautiful. The eye - I thought it was so bond. And Hitchcock came to mind, and I felt like it would be fascinating to have Bond in there watching them, and basically intercutting Tosca with him, and have that stand-off between Green and him. And then go to this abstract, dreamlike kind of sphere. And none of that was in the script. I pretty much designed it when I saw the location, and then worked around the location and did the scene I wanted to do.


QUESTION: So it would be a challenge for you to strike a balance between doing something like that, which is quite artistic, and also very adult, versus the sharp cutting that opens the film, and the use of very quick cuts for the action sequences. But presumably designed to cater for the younger generation of movie-goers. Is that part of the thinking, or not?

MARC FORSTER: No. I hadn't had that part of the thinking. I thought at the beginning, I wanted to just, like, be right in the action, and to start in the middle of this car chase. And just pushed the audience right into the movie, with this intense car chase, and the certain violence that the car had as well. And then go from there to - you know, he opens the trunk. And then where the intercutting for me started, that process, which then happens again in the Sienna foot chase sequence - is when I went to Sienna for the first time, they showed me the systems, the underwater channels the Romans built. And I felt, "Okay." Because in the script, the safe house was in tarp [?], and they escape through a window across the roof. And I said, "It would be much more interesting to start underneath. There's a safe house. Then there's the chase sequence, and the moment the chase sequence starts, we intercut it with the horse race. The horse race starts, and we have those two races intercut. The moment Bond pops up in the middle of the square, the horse race is finished, as this entire sort of panic." And then they come to the roof, and I always thought that intercutting between the horse race and their chase would be rather interesting. 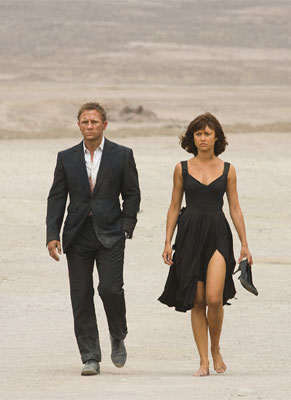 QUESTION: You used your frequent collaborators on this, too.


QUESTION: You have your usual DOP and your editor, who have both worked with you since the beginning of your American career.

MARC FORSTER: Yeah. And the visual effects designer, as well.


QUESTION: Was that important for you?


QUESTION: Do you feel, "It's important to me that I have this?"


QUESTION: Locations are obviously a primary character in Bond movies. What were the most difficult locations for you to film in?

MARC FORSTER: You know, as you said, I think these locations are characters themselves. And I thought it was important for me to shoot on location. And because they usually do a lot in the studio, in the Bond movies, in the last few ones. And I thought, "No, we have to go back like in the old days. We have to shoot on location. It will feel stronger, and will have much more of a visual impact." So we shot that Haiti part in Colon, Panama.


QUESTION: Oh, really? So you never filmed in Haiti. That's very unusual. Did you try to film in Port Au Prince?

MARC FORSTER: No, we didn't, because the thing is that - you know, I had to, like, summarize a couple of the locations. And some of it from Bolivia was all shot in Panama and Northern Chile. But we found a place called Colon, which is in the Caribbean side of Panama. And it's - literally looks like Haiti. They had - the population looks like it. And we have actually had Haitian extras who are living there. Who - you know, who speak Creole. So we were able to find all that in Colon.


QUESTION: What surprised you the most about making a first action movie?

MARC FORSTER: What really surprised me - shooting the action wasn't so hard. What really was hard was writing the action, and getting down to the beats, and figuring out the beats of the action. But then once the execution of it is - like, you know, there's so much rehearsal and planning, that's pretty smooth once you have it down. But really creating it and putting it down on paper is really hard.


QUESTION: It's the shortest Bond film we've seen in a long time. How much pressure was there for you to cut it to a 100-minute length? And is there a lot that was missing, that we'll find in the DVD?

MARC FORSTER: No. I actually - there's everything in there, except one scene I shot, a short scene, which is, like, 40 seconds or so. So it's out. But apart from that, everything is in there. And the idea was for me to - that the movie feels like a bullet. It starts, and it keeps you on the edge of the seat until the end. And I felt the last one - Casino Royale, for me, I felt was - during the poker game and stuff, a little breathy. It felt a little long. So I felt, I wanted just to make this really this tight, short kind of movie. Which just, like, takes you.


QUESTION: Do you think your next film is going to be - will it be two people in a room talking for an hour and a half?


QUESTION: Do you know what you're doing next?


QUESTION: Do you want to revisit any of your other films, as - you have nothing really to do as a sequel.


QUESTION: Not another Bond movie?

MARC FORSTER: No. No, they asked me, but I felt like I'd rather switch genres again.

Quantum of Solace continues the high octane adventures of James Bond (Daniel Craig) in Casino Royale. Betrayed by Vesper, the woman he loved, 007 fights the urge to make his latest mission personal. Pursuing his determination to uncover the truth, Bond and M (Judi Dench) interrogate Mr White (Jesper Christensen) who reveals the organisation which blackmailed Vesper is far more complex and dangerous than anyone had imagined.Forensic intelligence links an Mi6 traitor to a bank account in Haiti where a case of mistaken identity introduces Bond to the beautiful but feisty Camille (Olga Kurylenko), a woman who has her own vendetta. Camille leads Bond straight to Dominic Greene (Mathieu Amalric), a ruthless business man and major force within the mysterious organisation.On a mission that leads him to Austria, Italy and South America, Bond allies with old friends in a battle to uncover the truth. As he gets closer to finding the man responsible for the betrayal of Vesper, 007 must keep one step ahead of the CIA, the terrorists and even M, to unravel Greene's sinister plan and stop his organisation.