Already both a critical and phenomenal box office success in its native Italy, The Best Offer was the biggest winner at the 2013 David Di Donatello awards (Italian Oscars) in June, where it walked away with 5 awards including Best Film and Best Director, and has grossed a staggering $11.5 million dollars at the Italian Box Office. Shot on location in Italy and Prague, The Best Offer marks another collaboration between Tornatore and the legendary Italian composer Ennio Morricone who scored the film.

A dramatic mystery set in the high-stakes world of European art auctions, The Best Offer stars Geoffrey Rush as Virgil Oldman, a solitary, cultured man whose reluctance to engage with others, especially women, is matched only by the dogged obsessiveness with which he practices his profession as a high-end antiques dealer. One day Virgil receives a phone call from a mysterious young heiress, Claire (Sylvia Hoeks), who asks him to evaluate some family works of art. It will be the beginning of a relationship that will change his life forever…

About the Character:
Geoffrey Rush: I play the character of Virgil, who's a well-established, high-flying, highly respected art expert. He's very representative of old European history and heritage and culture. He's extremely wealthy, he's extremely knowledgeable, he's also extremely lonely. My character also works as an auctioneer - so these are guys with big egos - the tension in an auction room is like great courtroom dramas, for example. The stakes are always very high because they might be dealing with a painting that's worth tens of millions of euros and it would be sold in sixty seconds. He's able to detect wether a painting is fake or an authentic masterpiece. 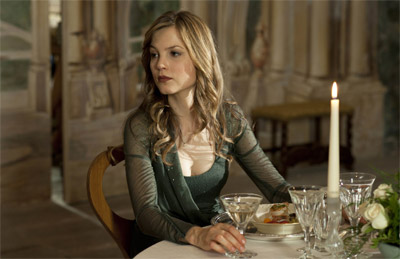 Sylvia Hoeks: I always find it hard to tell about a character. I love diving into other people's minds and hearts and feelings, but it's also me putting a lot of myself in the role. To me it's been hard to analyse exactly who Claire Ibbetson is. She is actually two women, she is even more women. She's a mysterious character in the film and I I'd rather not give you any spoilers…


Jim Sturgess: Robert is a young guy who owns a workshop. He can pretty much fix anything, whether it be some digital kind of computer or old typewriter. To play this character it was important to me to feel comfortable in the workshop, as that's where Robert existed and where he lives in the whole of this film.

So I spent some time fiddling and playing around with cogs, wheels and screws, just so when I held those objects in my hands I had some sort of relationship with them and felt like I had the ability to fix whatever I needed to fix just like as Robert would have done. It's him that Virgil goes to when he finds some mysterious pieces of an ancient machinery. There's a real kind of admiration and respect between the two of them.


Geoffrey Rush: He is an expert on art forgery - his knowledge extends 700 years of European and world art history. He also sells the estates of families, and antique furnishings and in this particular situation he meets this very troubled young woman, Claire.


Jim Sturgess: While he's doing his valuation at Claire's house, Virgil comes across some strange old cogs and wheels. He takes them to Robert, who will discover that those are probably parts of an old and precious automaton. Virgil also goes to Robert for advice about Claire, this mysterious creature leaving in the villa. So Robert and his workshop become a safe, almost therapeutic venue for Virgil.

He's a very successful man, but his job is also a way to escape from life. I always find interesting that people are not logical. People are different every day, they're impulsive, they react to situations in a way that you wouldn't expect. For the role of Claire, I've tried to find the kind of woman someone like him would fall in love with.


About the film and Giuseppe Tornatore

Geoffrey Rush: I read the script and it was what we call a -page-turner' - integration of multiple story lines, fascinating characters, extraordinary twists and turns and a very high level of art. This is scriptwriting that you don't see that often!

Giuseppe came to Melbourne and we spent four days together just mapping through the screenplay. And I asked him 'why did you cast me in this role? There's a lot of actors who could have played this character"... And he said that he saw me on the red carpet maybe around the time of The King's Speech. I had my head shaved at the time and he thought 'That's who I want to play Virgil Oldman!"


Sylvia Hoeks: This film to me was a surprise, after a surprise. When you think something is going to happen in a way, there's an unexpected twist and turn.

Tornatore is an amazing director. Every move you make, every flicker in your eye, every heart beat.

At times, we were doing a scene and he came up and changed something on the table. He's there with you, like he's acting at the same moment. He's almost like a conductor. And sometimes you see him behind the camera and looking satisfied, and that's a really great moment for an actor.


Jim Sturgess: I liked a lot how Giuseppe has involved this automaton between the characters of Virgil and Robert. Their relationship grows as they add new pieces towards the automaton and while they build this machinery and it grows and grows, as does Virgil emotionally, becoming more and more human.

Have been working with Giuseppe is amazing! He really truly is a maestro at what he does. When he's on set, his attention to detail is just like no other I've ever seen at. He's got the front row seat and he's completely involved in what's happening.

I find that his films are always infused with so much of humor, drama and emotion and there's such a class to everything he's made. He really is just an amazing cinema and story teller.


Geoffrey Rush: Giuseppe Tornatore is a classical, very elegant director. He's a maestro at creating edgeof-the-seat suspense, tension, release. He empowers the audience's imagination to be on high alert. He has a highly original sense of the camera. He knows the fundamental craft: he knows where to put the camera, when to put the camera, why he puts the camera. I find this very exciting.