Are you prepared for the World Premier of The Kings of Mykonos: Wog Boy 2?

Vince Colosimo: Always ready! Always! I've got my family and friends coming, just about 2,500 thousand people (laughing)! No, just about 60 people, so many people wanted to come.


Tell us a little bit about the filming, it looks like you had a lot of fun on set.

Vince Colosimo: It was great; it was so much fun, it wasn't fair that we were there working. To be in a place like that, one of the most beautiful islands in the world, be with your mates and get paid to do this stuff and have fun and do comedy, it's not right. We were around beautiful people all the time, eating and drinking- it was just the best!


What was the feedback from the Mykonos residents? 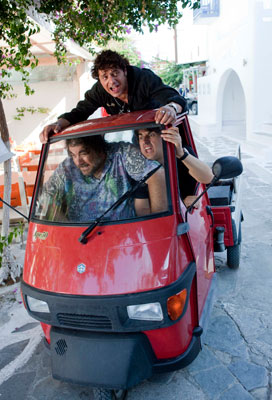 Vince Colosimo: They loved us being there! Nick (Giannopoulos) is like a local anyways and I became one too. It was funny, it'd sit around the locals and they'd start talking Greek to me and I was nodding and they actually thought I spoke Greek! I just said 'yes', 'yes'... Just like a local.


Did they understand the concept of 'Wog Boy'?

Vince Colosimo: Yes, they understood the concept of what we were doing; there was a little bit of explaining here and there. Most Greeks speak English, so it wasn't hard to really explain to them that it was a comedy. They all loved the fact that we were there, in Mykonos, honouring their beautiful land and filming it for the world to see. They just want the world to see how beautiful it really is, it is so beautiful and many people, in the rest of the world, don't get a chance to see places like that.


How long were you in Mykonos filming?

Vince Colosimo: 6 weeks. Never long enough, you can't ever be there long enough. It is gorgeous.

Vince Colosimo: Let's see how this one goes; we've always got a million ideas, Nick and I, and we want to get them out there before the wheelchair takes over (laughs).


How similar are you to your character, Frank?

Vince Colosimo: Not at all. Vince and Frank- very different. Nick and Steve- same.


Was it easier to play Frank than Joe Corp or Alphonse Gangitano?

Vince Colosimo: Not really, actually! Doing comedy sometimes is harder than people think; getting it right and getting the timing right, because you are out there to make people laugh. Joe Corp and the Alphonse character they're hard and deep. A lot of people say it is fun to play the bad guy, and it is fun playing the bad guy. But playing the nice, charming and funny guy is a real challenge sometimes, as well. It wasn't easy. 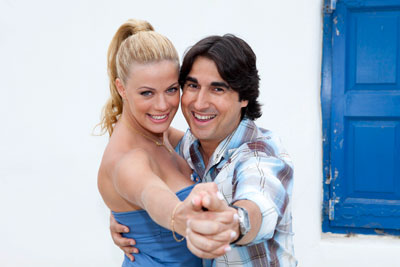 Tell us about the dance scene, you made it look easy. How long did it take to get right?

Vince Colosimo: That's not easy either! (Laughing) I think Nick and I thought about the scene for three months and then we practiced for about two months, we had a lot of sessions. It is good fun!


Who wrote your pick-up lines for the movie?

Vince Colosimo: They're all Nick Giannopoulos.


What is the best way to pick up ladies, if it's not the pick-up lines?

Vince Colosimo: Fragrance! Have a good fragrance on, you have to smell good, always gets them, always. Put something nice on.


How was it being surrounded by beautiful Greek woman, in the film?


Are the girls all from Greece?

Vince Colosimo: Some, Zeta Makrypoulia is from Greece and Cosima Coppola is from Italy. We auditioned them, they came along and auditioned and got the role. It was good to use foreigners.


Are Frank's outfits similar to what is hanging in your wardrobe?

Vince Colosimo: Absolutely! They're all my clothes, it was my wardrobe. No... It's all costume wardrobes (laughing)! 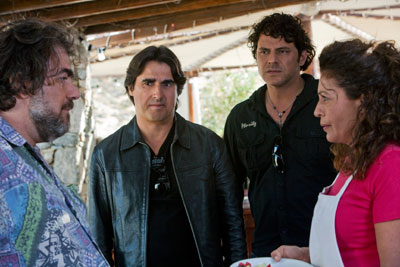 The first shirt, when you go out in Mykonos, is nice, did you want to take that one home?

Vince Colosimo: All the world stamps? Yes! I think I took that one home; but then you can never wear it because people saw it in the film and it's weird. Maybe in a year, I'll wear it.


Are you still insulted by the term 'Wog'?


Do you believe the movie has lighted the term 'Wog'?

Vince Colosimo: Of course. This movie is all fun and games. It's a really fun film, that was made for people wanting to have a good time and get out there and have a laugh; spend there $15 and know they will be getting a good night out of it. Wogs and Anglos are all going to enjoy it together, which is what it is about.


How long have your known Nick Giannopoulos?

Vince Colosimo: We've been mates for a long time, we went to college together; he was in third year when I was in first year at the VCA (Victorian College of the Arts) a long time ago, more than 20 years now. We toured a couple of shows, for five years, together; we lived out of each other's pockets. We have now made a couple of films together and more than a thousand shows on stage, together. We know each other pretty well.

Vince Colosimo: I'm still hosting this show called Families of Crime and promoting The Kings of Mykonos, which is in cinemas 20th of May and you can get on to www.kingsofmykonos.com.au.

The Kings of Mykonos: Wog Boy 2

The sequel to the box office smash hit comedy, The Kings of Mykonos: Wog Boy 2 heralds the return of Steve Karamitsis (Nick Giannopoulos) alongside Frank (Vince Colosimo) in a story that takes our heroes from one Greek paradise (Melbourne) to another (Mykonos) in order to reclaim a family inheritance.

Release Date: 20th of May
www.kingsofmykonos.com.au