The Lashful Beauty Queens!
The girls from fresh Australian band LASH are not your average pop princesses, in fact, they'd prefer to let their music speak for itself. Formed while the girls were attending high school, their music continued to impress local audiences, giving LASH some fantastic exposure and catching the attention of some of music's best producers and songwriters, who took the girls under their wing. The results speak for themselves - with two great singles and a pending album - the sky's the limit for this new Aussie girl group.

GIRL had the pleasure in speaking with Lash guitarist - Jessica Bennett.

First Job: Working in a band
A Talent You Wish You Had: Speech
The Best Advice Given To You: To be yourself and if people don't accept you for who you are, then obviously, you wouldn't be interested in their friendship anyway in the long run.
What Can You Never Leave Home Without: My contact lenses
If you were a cartoon character, which one would you be? Scooby Doo
If you were told you had a minute to live, what would you do? Give my mum a big kiss

GIRL: Your next single release is the song "Beauty Queen". Tell us a little more about this track and who wrote it?

Jess: "Beauty Queen" is similar to our first single "Take Me Away" in the way of guitars and drums. We love full on guitar sounds and hard rockin' drums. The vocals however are different, for Belinda is the chosen singer. I would describe this vocal melody to be more pop orientated. We all sat together and wrote this song coming up with the music first and then worked out the lyrics, fitting them to a vocal melody.

GIRL: You were locked away in the recording studio for a period of 12 months preparing songs for your debut album. Was it an enjoyable time for you girls or did it become a little tense at times?

Jess: Recording this album was one of the best experiences we have had in our lives. We loved being in the studio together and with our producers. It was a lot of fun. Of course there were a few times where things got a little tense but being under that bit of stress helps bring out the best in all of us. 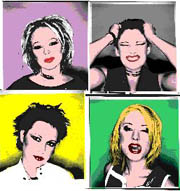 GIRL: A number of great writers and producers have contributed to your music like Andrew Klippel, Andy Baldwin and Barry Palmer. Did you learn a lot from working with these guys?

Jess: Yeah it was great working with such experienced music guru's. I think we all learnt a lot from these guys and we are very grateful for their time and effort.

GIRL: Did they have any great words of wisdom to offer you girls about the music industry?

GIRL: Lash was formed while you were all in high school. Has being friends made a difference to the way your music career has progressed?

Jess: Being friends from the start is a bonus. It helps in the writing process because you can say things like "nah..that sucks, try this," and people don't get so offended. I think it has benefited our careers a lot.

GIRL: What are some of your favourite bands at the moment?

GIRL: How was touring with 'The Living End'?

Jess: Very ROCK indeed! I loved the fact that after our show we could stand on the side of the stage and watch every move the guys made. They are such a great bunch of guys too.

GIRL: What has the reaction from your friends been regarding your newfound fame? Have they been supportive?

Jess: Our friends are great, they haven't changed towards us at all. They are very supportive and always have been. We still go out and have fun. It's funny though when you go out because the band always seems to be the topic of conversation! (laughs)

GIRL: What do you think of all those girl groups out there who are more about their looks than their music?

Jess: I guess they are who they are. They are in a totally different league to us. They are pop acts and we are a rock act. I think that pop acts put a lot of time towards the way they look for the public. We aren't like that but I guess we're just different.

GIRL: Besides music, what do you girls enjoy doing together?

Jess: We like to have a laugh! There is always something or someone to laugh at!

GIRL: Dish us the goss, who is the laziest member of the band?

Jess: I could say but I would probably get a big slap over the head! (jokes)

GIRL: Are any of you currently in a relationship?

Jess: Some of us are but it's hard having relationships on the road.

GIRL: Musically, who would you like to collaborate with next?

Jess: That's a hard one. Personally most of the people I would like to work with are already dead. How typical! I'm pretty happy with the team we have now though.

GIRL: Are you looking forward to going on the road with 'Motorace'?

Jess: Indeed! Should be a lot of fun. This is only our third tour so we should have a lot to learn off the boys. Apparently this is their thirteenth tour!