INTERVIEWERI'm assuming that you have seen your finished film.

INTERVIEWEROkay. Great. I always ask because I don't think Manolo's seen it yet.

RAJA GOSNELLYeah. He intentionally didn't want to see it, which I thought was interesting.


INTERVIEWERInteresting. Okay. Well, that, that's an interesting place to start.


INTERVIEWERManolo hasn't seen it yet and he, he didn't want to see it yet. What, what's the...?

RAJA GOSNELLHe wants to see it with his family from Colombia at the premiere.


INTERVIEWERAh. I see. I see.

RAJA GOSNELLIt's important to him to experience that with them.


INTERVIEWERWell, how much was doing this film, in your mind, like doing an animated project?

RAJA GOSNELLNot much. I mean, what attracted me to the story was these characters' journeys. I just fell in love with the characters and sort of the journey they went on. It was really a huge opportunity for me to do this sort of big canvas movie in Mexico. And I wanted to show the Mexico that we up here (in the USA) don't get to see that much of, the beautiful beaches, the rainforests, the Sonora desert and this beautiful colonial city of Mexico City.


INTERVIEWERI found it to be a real beautiful postcard for Mexico. It made me want to go to Mexico.

RAJA GOSNELLI hope so. It wasn't, wasn't an accident. We really wanted to show a different side of Mexico than we in the U.S. are used to seeing. 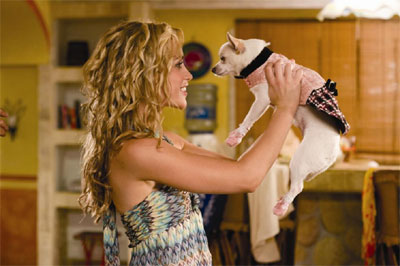 INTERVIEWERYou had to spend how much time just in sound studios, voice over studios with, with all these incredible actors.

RAJA GOSNELLThe original recording of the script probably didn't take that long and I was really fortunate in that I got the actors together at the same time. So, all of Drew and Andy's scenes are actually together so they could play off each other. And, and, you know, I got Drew and George together, etc, etcetera. So, there really is a sense that they're acting. They're, they're going back and forth and they're not just reading lines. Then we whittled the film down and found new places for lines and subsequent sessions as well. So, all in, I'd say there was probably ten days worth of recording for everybody.


INTERVIEWERWhat about the casting process? Was there kind of a "Hey, we want you to do this thing and it's Beverly Hills Chihuahua."

RAJA GOSNELL(chuckles) My first call was to Drew and I said, "Drew, there's this adorable white Chihuahua." And she said, "I'm in."

RAJA GOSNELLBecause she's a dog lover. Drew and I worked together in the past. So then the floodgates just opened. I mean the Latin actors really kind of lined up because the script is great. It's very respectful to Latin culture and it's sort of about learning about Latin culture and they just saw the opportunity to be part of something great.


INTERVIEWERWhat was that like from sitting in your chair to just kind of look at this list of names?

RAJA GOSNELLIt was fantastic. It is fantastic. And, and they just brought so much. I mean, George brings George to that character, you know. It's not just a guy reading funny lines. It's like, that is George Lopez and his entire persona goes into that performance. Andy brought so much gravitas and that sort of wounded character who finds redemption. And obviously, Luis is funny and Piolin, who's a radio, a huge radio star, has lent his voice to the movie. So, um, we were just blessed upon blessed.


INTERVIEWERAnd on the live action side, this is Manolo's, am I correct, first real American film that he's involved in?


INTERVIEWERYeah, and so a fresh face for an American audience.


INTERVIEWERYou found a gem there, I think.

RAJA GOSNELLI think so. He's obviously an incredibly great-looking guy and he sort of plays the soul of the movie in a way. He's the honest guy. He's the straight shooter and he kind of guides, you know, Piper's character through Mexico and helps her grow up in a way.


INTERVIEWERPiper. Tell me about her.

RAJA GOSNELLShe was our first call, too. We wanted someone who was kind of mature. We didn't necessarily want to go down the Disney kid route with the character. We wanted someone a little more grown up, but whose character hadn't grown up yet. She just seemed perfect for this role.


INTERVIEWERAnd Jamie Lee Curtis is always just like a breath of fresh air.


RAJA GOSNELLShe's amazing. She absolutely is. I mean, that character could have, on the page, could have gone way over-the-top and crazy loopy, but, uh, Jamie Lee grounded her, made her real, made her charming, and, and I believe it. I mean, there are ladies out there and people out there that dote on their dogs with that much love.


INTERVIEWERWhat's the name of the shop right around the corner from here?

RAJA GOSNELLYeah. And they're growing out to the suburbs, by the way. There's one opening up, uh, near me. I don't think it's just going to stay isolated in the little pocket of Beverly Hills and New York. I think that dog couture is going to grow out.

RAJA GOSNELLExactly. Yeah, one of my favorite shots is the Lamborghini goes by and we see Jamie Lee and we track her all the way through the spa until the dog, the purse opens up and then revealing the dogs. So, we did get some fun stuff in there.


INTERVIEWER (overlapping)Just tell me a little bit more about her character, 'cause I think you're right. You really, think the audience really will embrace her character and like her, but she could very easily have been somebody that could have just been such a snob that people would back away from her.

RAJA GOSNELLThat's Jamie Lee. That's the real Jamie Lee. She just brings so much warmth and sunshine and integrity to what she does. I mean, you just, you believe her because it is her. She's just immensely likeable. .


INTERVIEWERTalk about that whole, you know, P-G Disney aspect, um, you know, when you have so much heritage behind it, how, how does that feel to be a director on a project like this?

RAJA GOSNELLIt was amazing and it was a tremendous responsibility, I felt, because I grew up watching Old Yeller and Bedknobs and Broomsticks. I want this movie to be around in thirty, forty years. It was with the help of Oren Aviv and Louanne Brickhouse, my two immediate executives, we worked really hard to make it a classy movie to not stoop too low in our humor and to have adult themes and themes that will last, enduring type of themes. My hope and wish is that my grandkids are watching it years from now.


INTERVIEWERTalk to me about, uh, things like the cinematography and your approach to that.

RAJA GOSNELLThe opportunity to make a big canvas movie in Mexico was one of the reasons I took this movie. I just couldn't wait to show a different side of Mexico. The beautiful side of Mexico that American audiences don't see and Phil Meheux was a fantastic cinematographer. You know, he did the last Bond movie and he and I worked together just what the looks would be. We just found amazing locations that had never been shot before and it all goes into the mix.


INTERVIEWERAnd you also had a lot of resources to work when it came with the music. I mean, that was top flight and whether it was just soundtrack or score, it was all top-notch.

RAJA GOSNELLHeitor Pereira, who's a Brazilian composer heard about the script, came in, met with us, brought his guitar with him, played us some stuff and we all just fell in love with him. He did an amazing job on the movie. You know it's a traditional film score in a lot of ways, but you there's interesting sounds and interesting cultural things. He went down to certain regions of Mexico to get a specific instrument for a specific sound. He just really got into it and really brought so much. The personality, like the Papi theme, for instance, brings to that character or his Chloe theme or his Delgado theme, sort of the weight and gravitas. It just the music in this movie tells the story as much as anything else. And he did a fantastic job. 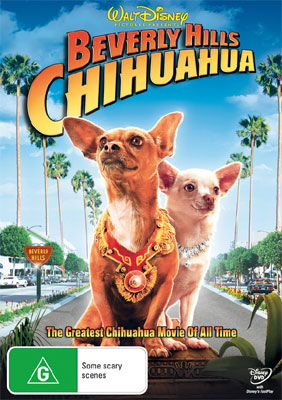 Get ready to meet and fall in love with Chloe, a spoilt-rotten cheeky Chihuahua, as she is thrown into a whole new world of action and adventures; a world very different to her fashionable, pampered and diamond encrusted life of Beverly Hills.

Voiced by an all-star cast, BEVERLY HILLS CHIHUAHUA includes DREW BARRYMORE as Chloe, JAMIE LEE CURTIS as Chloe's owner Viv, ANDY GARCIA as the lonely German Shepherd Delgado and GEORGE LOPEZ as a love-sick male Chihuahua Papi in hot pursuit; taking you on a non-stop ride of doggy adventure that the whole family will enjoy.

The action begins when Chloe, left in the care of her owner's niece Rachel (PIPER PERABO), is taken to Mexico on a holiday with the girls, against her will. Left alone in the hotel room without room service, Chloe decides to take matters into her own paws only to be dog-napped while on the mean streets of Mexico. Without a manicurist or Rodeo Drive boutique anywhere in sight, what is a fabulously pampered Chihuahua to do?

Relying on the help of a few unexpected friends including the lonely, street hardened German Sheppard Delgado and a motley crew of loveable creatures, Chloe tries to make her way back to L.A. Meanwhile Rachel, with the help of Viv's gardener Sam (MANOLO CARDONA), and his Chihuahua Papi frantically search for Chloe before Aunt Viv returns.

For Chloe the road is a tough one and along the way she learns valuable lessons in friendship and loyalty that will change her life forever.