Sam Rockwell has played his share of interesting characters, but Choke is a whole different ball game. Here he plays Victor Mancini a medical-school dropout who has devised an ingenious scam to pay elder care for his Alzheimer's-afflicted mother: he pretends to choke on pieces of food while dining in upscale restaurants. He then allows himself to be "saved" by fellow patrons who, feeling responsible for Victor's life, go on to send checks to support him. When he's not pulling this stunt, Victor cruises sexual addiction recovery workshops for action, visits his addled mom, and spends his days working at a colonial theme park. The often shy actor talked to PAUL FISCHER in this exclusive interview.

QUESTION: So, this is really a very - really unusual character, by any stretch of the imagination.

SAM ROCKWELL: I don't know. I just think of them as outcasts, or antiheroes. And - I didn't think of them as that odd, I guess. But I guess people - you know, they're not your typical - I think they're more interesting.


QUESTION: What was it about this particular guy, and his - that appealed to you? Was it the overall character, or the general script?

SAM ROCKWELL: I liked the character. I liked the script. I liked the story. It was about people connecting, and people trying to find love, you know? In all the wrong places.


QUESTION: Is it about somebody craving attention, as well?


QUESTION: Could you identify with him at all?

SAM ROCKWELL: Yeah. I mean, I think everybody has a little bit of Victor in him. Maybe not everybody, but I don't think it's that obscure. I think it's pretty universal. Mothers and sons and stuff like that, and just trying to find - you know, have a normal relationship. You know? Anybody who's single can kind of relate, I think.


QUESTION: What about the kinds of physical challenges you had to prepare for this? I guess the choking aspects of this. What difficulties were there for you in being able to do that, and to work through all that stuff?

SAM ROCKWELL: Yeah. I guess that stuff was a lot of fun to get into. It's the choking stuff is a way for him to get someone to embrace him and take care of him, and stuff like that.


QUESTION: Do you think that there's not enough films that deal with the purity of emotion in American film? 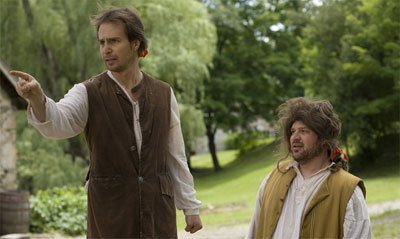 SAM ROCKWELL: The purity of emotion.


QUESTION: Films that really get to the emotional core of relationships and characters?


QUESTION: Are they the kinds of movies you also like to see as an audience member?

SAM ROCKWELL: I do. You know, Harold and Maude. The Fisher King. Movies like that, you know, they stayed with me. They had that kind of tone.


QUESTION: What was it about acting that appealed to you, when you were younger?

SAM ROCKWELL: I guess hiding under another character, and trying to sort of just pretend - you know, trying to - wanting to be a cowboy, or be a detective, or something romantic like that - that's usually what it was all about. Pretend.


QUESTION: Did you always see yourself, when you were working as an actor, do you feel it's more important for you to be in independent films as a way of expressing yourself as an actor, more than what mainstream Hollywood was prepared to offer you?

SAM ROCKWELL: Oh, yeah. I think it's a better venue to do the kinds of parts that I'd like to do, you know? I think so, yeah.


QUESTION: Frost/Nixon is hardly an independent film. How much fun was it for you to play James Reston in that piece?


QUESTION: How would you describe Ron as a director?


QUESTION: Had you seen the play?

SAM ROCKWELL: I did see the play. Yeah. I liked it a lot. I'm really happy with what we did in the film. I haven't seen it, but I felt good when we walked away from it.


QUESTION: You're incredibly busy. You seem to have a few things coming out, or that you've finished working on.


QUESTION: Is that gratifying for you?

SAM ROCKWELL: It is. I think it's probably better to be busy than not busy, as a rule.


QUESTION: How selective are you?


QUESTION: Such as Moon, I presume would be one of them?

SAM ROCKWELL: Oh, yeah. Yeah. That's - I'm real proud of that. It was a tough shoot.


QUESTION: In what sense?

SAM ROCKWELL: Well, technically challenging. I'm playing clones and stuff. So that was kind of tough. You know. But it was a real acting challenge. It was fun, though. It was a lot of fun.


QUESTION: What sort of character do you play in that?


QUESTION: So you were acting - you were playing both the character and the clone.

SAM ROCKWELL: Yeah. Yeah. And so technically, it's a bit of a trick, with the stop-motion camera. It's a lot of effects. And to do it - we did it in a month, you know? So we did, like, five weeks or something. It was a tough shoot, you know?


QUESTION: Wow. I guess there's also fairly high expectations on this Robert DeNiro movie that you did called Everybody's Fine.

SAM ROCKWELL: Yeah. That was a lot of fun, yeah.


QUESTION: With Kate, and - who do you play in that?


QUESTION: So, what's it like being Bob DeNiro's son?

SAM ROCKWELL: It was fun, you know because he's a big hero of mine. So I got to act with him, and that was a real - that was a treat. You know? Because, I mean, I grew up watching Taxi Driver, Mean Streets, Raging Bull. You know? I mean, he really is my idol, you know? So working with him was a bit surreal.


QUESTION: He has a reputation of being a very, very shy guy. Do you find that yourself?

SAM ROCKWELL: Yeah. Well, I think he is shy. And I think he is not a big talker, you know? But he likes a good laugh as much as anybody else.


QUESTION: What else have you finished?

SAM ROCKWELL: Well, we've got Gentlemen Broncos by Jared Hess, too. That's in the can, too. The guy who directed Napoleon Dynamite.


QUESTION: Is it another sort of strange comedy?


QUESTION: Really? Does it have a sci-fi tone to it?

SAM ROCKWELL: Yeah, it does. You'll see. It's a movie within a movie. It's an interesting film.


QUESTION: What kind of character do you play in that?

SAM ROCKWELL: I play, like, a hillbilly Buck Rogers. Sort of a cowboy Flash Gordon.


QUESTION: You've been in the business a long time, Sam. Do you have any aspirations to do anything else besides being in front of the camera?


QUESTION: Do you want to direct?

SAM ROCKWELL: I don't know. It'd have to be the right material. I don't really have a big desire right now, but you never know.

But because Victor is played--and played quite well--by Sam Rockwell (THE HITCHHIKER'S GUIDE TO THE GALAXY), it's hard not to have a little sympathy for him. He spends his days working at a colonial tourist attraction with his best friend, Denny (Brad William Henke), incurring the wrath of his authenticity-craving boss (Clark Gregg, who also directed and wrote the film). His evenings are spent visiting his mother (Oscar winner Anjelica Huston) in a private hospital, but she mistakes her son for men in her past and wonders when Victor will visit. But young, pretty Dr. Paige Marshall (NO COUNTRY FOR OLD MEN's Kelly Macdonald) has a radical idea about treatment that may bring his mother's mind back, and Victor's devotion to his mother--and a desire to sleep with Dr. Marshall--makes him eager to try.

CHOKE rivals some soft-core porn with its abundance of sex, nudity, and adult toys, but there's more here than just the shocking and the steamy. This dark comedy is based on a novel by Chuck Palahniuk, most famous for writing the book FIGHT CLUB. Like the adaptation of that novel, CHOKE is a surefire cult favorite that meditates on the themes of culture, religion, fathers, sexuality, and identity. It's a mean, misanthropic film at times, but similar to its protagonist, it's hard not to like. Gregg has made an assured directorial debut, and his script retains the blackly humorous tone of the novel.