CHRIS WEITZ AT THE TWILIGHT OF HIS CAREER.

Director Chris Weitz thought he was able to make a franchise out of The Golden Compass but the film's commercial failure sidestepped that plan. So it was with renewed passion that he agreed to helm the second of the much-anticipated Twilight films, New Moon, and spoke to Paul Fischer in this exclusive interview.


QUESTION: after Golden Compass, which possibly had franchise all over it how reticent were you to take on another film that was in another franchise mold?

CHRIS WEITZ: I was raring to go, because I had been so disappointed by my experience with Golden Compass., which was meant to be longer, it was meant to flesh out Philip Pullman's ideas more and really, the version that you saw had been cut to ribbons by the studio. So, I think that there are many good things in it, and moments that I can be proud of, and I think it looks good and there are moments in which the themes and the characters are right on. But there's so much missing from it. So, I sort of felt like I really wanted to do it right this time. And I sensed that Summit wanted to make a faithful adaptation of Stephanie's book, so this was going to be my chance to redeem myself in the fantasy franchise.


QUESTION: Where is the dividing line that exists between your aims as a personal filmmaker, and the needs of the source material, and the demands of the fans? I mean, do you feel that kind of pressure? Does it concern you at all, going into it?

CHRIS WEITZ: I didn't feel a tremendous amount of pressure, because in terms of - what one really wants is for someone to go and see the movie that you're going to make. So - I thought that was covered. I feel like when I'm adapting a novel, which is what I've done for the last three movies that I've made, my job is to be faithful to the material, and to the fans, or to the fans' perception of the book. So, that felt good. If I could describe in any manner - I mean, I still have sort of tremendous freedoms that I enjoy, in terms of the visuals and how I'm expressing the tone, and the way that I'm kind of improvising on the theme, as it were. If it were, like, a musical number. Now, maybe someday I will sit down, write my own script, and make it precisely the way that I want. But for me, this was precisely the version of New Moon that I wanted to make. 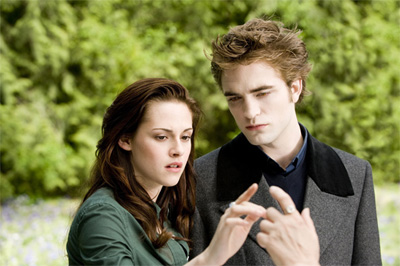 QUESTION: What kinds of changes were there from novel to screenplay, in this instance?

CHRIS WEITZ: Well, inevitably, because you're adapting a 600-page book to a two-hour film, you end up condensing action, dropping some scenes, expanding some scenes to fulfill the role that dropped sequences from the book did. But the fans, I think, understand this so long as you don't get rid of the tone of the characters, and the moments that they really care about. And I think if you can be canny about what they really care about, and pay attention to that, then 'you're in pretty good shape. Eventually, I won't end up pleasing everyone. But I do think that this is one that was made for the fans.


QUESTION: Now - I mean, this franchise seems to in part have been responsible for a certain rejuvenation, as it were -

CHRIS WEITZ: Of the vampire industry?


QUESTION: What is this unending fascination that we have with this particular type of gothic creature?

CHRIS WEITZ: I can't claim to understand it, to be honest with you. I haven't quite put my finger on it, except that it's a metaphor that's adaptable for any particular generation, or decade. But I think, interestingly, the - a lot of the kind of iconology of vampires really isn't present in Twilight. In a way, they're more like demigods than vampires. You don't really see much sucking of blood from the neck. You don't see crosses, garlic. They don't burn up in the sun, they don't sleep in coffins. Really, what it's about is a young girl who doesn't think much of herself, who finds herself falling for a creature she thinks is way above her. And then finding out that that is, in fact, the case. So it's kind of like the sense of first love expressed in supernatural terms.


QUESTION: Now one of the early, key scenes, is a shot of her reading and studying Romeo and Juliet. Are there Shakespearean parallels? 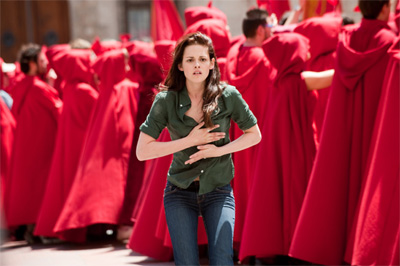 CHRIS WEITZ: Well, I think the reference to Romeo and Juliet excuses the terrible decisions and misunderstandings that happen in the course of the film. It's kind of a way of saying, "Well, there is this literary precedent for tragedy based upon misunderstanding." And - you know, Edward makes a terrible mistake by leaving Bella. He thinks he's protecting her. And later, there's a tragic misunderstanding which could be easily explained. And that kind of stuff happens in Romeo and Juliet. As for it being a tale of forbidden love in which two families are at odds with one another - that isn't really the case with kind of the Cullens and the Swans.


QUESTION: But teenage angst is certainly a theme in this.

CHRIS WEITZ: Yeah. First love is there. But otherwise, it's quite different, in many ways. And also, the role that Taylor Lautner's character plays, Jacob, is a much stronger rival for the interest of Bella than Tybalt is for Juliet.


QUESTION: Now, I'm sure this film's target audience is very excited that Taylor Lautner spends much of the film without his shirt on.


QUESTION: Right, I know. I mean, but there is definitely a part of me that goes, "Well, this is very clever marketing." [LAUGHTER] I mean, is there a thought process behind the way that these actors as well as these characters are presented for the target audience of this franchise?

CHRIS WEITZ: That's interesting. I mean, to me, it's just that turnabout is fair play. And that it's time enough that men get objectified for women, since it's been done the other way around, and young girls have been sexualized for men for quite a while. I actually think that if you look at the messages that this film has about sex, it's very traditional and restrained. I mean, there's a virginal heroine, who has actually stated outright that she's a virgin, which is kind of - in our culture, shocking. Things have turned around so much that that's the exception to the rule. And in terms of Edward's behavior towards Bella, he is incredibly circumspect about it, and traditional. So, yes, there's a lot of abdominal muscles on display. That's not going to kill anyone. 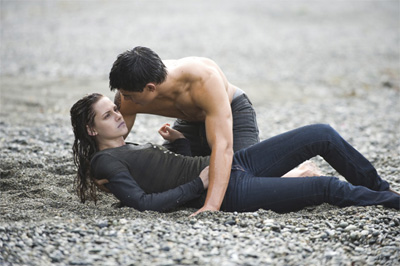 QUESTION: Now, what impresses me about you is that as a producer, you have a very different mindset to choices that you make, as against your role as a director in the sort of mainstream Hollywood scheme of things.

CHRIS WEITZ: Well - I mean, sometimes in terms of producing, I get to do stuff that kind of counterbalances the -


QUESTION: I mean, Nick and Norah, A Single Man-I mean, these are not the stuff of mainstream Hollywood. What do you look for as a producer? What do you and your brother look for, I guess-- because you guys are both still working together on certain things - as producers, that you do not look at as directors?

CHRIS WEITZ: Well - I mean, for us, the producing part takes less time, and so we're free to experiment with it a bit more. And we look for people we believe in, like Pete Sollett and like Lorene Scafaria, who wrote the script of Nick and Norah, like Michael Cera and Kat Dennings, who starred in it. Like Tom Ford. You know, really, it's just being able to give whatever we can, whether it's in terms of what limited expertise we have, or advice we have to offer, or whatever doors we can open to projects that we believe in.


QUESTION: How surprised are you about the response to Single Man?

CHRIS WEITZ: I'm extraordinarily proud. I'm really proud of Tom. I knew he was going to make an impressive film. Really happy about the reception that Colin Firth and Julianne Moore are getting. Proud of Nick Holt, who of course I've known since he was 12. It feels very - very, very good, that it's gotten the kind of attention it has, especially in these times. I think when the clock is almost reversing back to the closeted days, that Single Man represents. 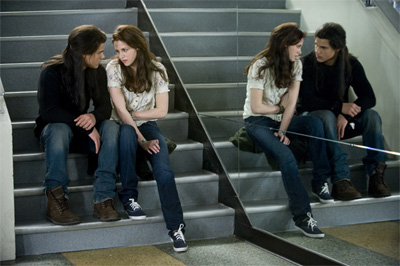 QUESTION: What are you planning on doing next, after this circus dies down?

CHRIS WEITZ: I will sleep, and then I will make a movie called The Gardener, which is about a Mexican gardener working in Los Angeles.


QUESTION: So it's not a huge Twilight-type movie, obviously.

CHRIS WEITZ: [LAUGHTER] No. It's a small one.


QUESTION: That must be a bit of a release for you, to be able to go from something like that.

CHRIS WEITZ: Well, it'll be interesting, because of course then we'll be working on a much smaller budget, and have fewer resources and comforts than we're necessarily used to. But I'll be relieved not to worry about where the talking animal is going to be standing, and that kind of stuff.


QUESTION: I mean, the last small movie you did, which is probably one of my - probably my favorite of your films, was About a Boy.

CHRIS WEITZ: Oh, thank you. Even that was not terribly small. You know, that had a budget around $30 million, I think. Or $27m. But that was great, because we could concentrate on the acting, and never have to worry about the green screen.

In The Twilight Saga: New Moon, BELLA SWAN (Kristen Stewart) is devastated by the abrupt departure of her vampire love, EDWARD CULLEN (Robert Pattinson) but her spirit is rekindled by her growing friendship with the irresistible JACOB BLACK (Taylor Lautner). Suddenly she finds herself drawn into the world of the werewolves, ancestral enemies of the vampires, and finds her loyalties tested.